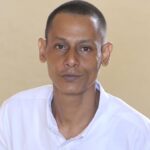 Kaieteur News – Yesterday the Court of Appeal reduced the sentence of 60 years in prison for the 2009 New Year’s Day murder conviction, Steven Allicock.
Allicock named ‘Stevie’ a father of six from Albouystown, Georgetown, was convicted and sentenced for the murder of Wendell Tappin.
Tappin, 33, was stabbed on Dec. 31, 2009, in Hill Street, Albouystown during a altercation with three men.
Allicock was implicated as the person who caused the victim with fatal stab wounds. A murder case was brought before Justice Navindra Singh who imposed the 60-year sentence in Georgetown High Court in 2017.

Shortly after the judgment was handed down, the 38-year-old convict filed an appeal against his sentence and conviction.
Allicock, in his document, argued that his conviction cannot stand, given the evidence presented during the proceedings. He argues that his sentence was excessive in all the circumstances of the case.
After examining the facts of the case, the Court of Appeal bench headed by the Chancellor of the Judiciary, Justice Yonette Cummings-Edwards, ruled that the evidence still reflected that Allicock was guilty of the offense. The judge noted, however, that after considering the application and arguments for reducing the 60-year prison term, the Court will grant the reduction to 25 years.
Prior to his arrest in 2015, Allicock remained on the run for five and a half years before his capture. His father, Leonard, and his uncle Randolph, were also charged with the murder. They were found not guilty at the Magistrates Court.