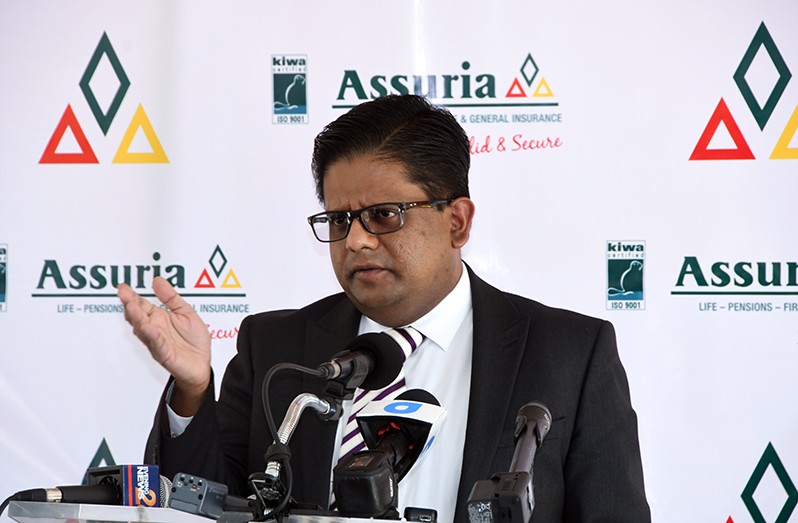 HAVING has recognized the practicalities of doing business in Guyana, Assuria General and Life Insurance Companies are moving to expand its operations here. In addition to establishing the Essequibo, Region Two branch, the Surinamese entity is actively building GY $ 800 million Headquarters (HQ) on Church and Carmichael Streets in Georgetown. Nabi Construction Incorporated is undertaking the project to build the modern five-storey office building, with an estimated timeline of 14 months.
Giving short remarks at the turf turning ceremony held on Wednesday, Assuria’s Managing Director Yogindra Arjune recalled that the company came to Guyana in 2012, before the emergence of the Oil and Gas sector. “Our idea was to be part of the existing industry, bringing new and innovative products,” said Arjune.

He noted that “This modern building is being built to highlight the fact that we are here to stay and contribute to the development of Guyana.”
The Managing Director noted that, in addition to its Head Office, Assuria-Guyana currently has eight branches, each providing employment to 67 people, plus 18 full-time agents. Arjune also contacted Assuria to be certified by ISO (International Organization for Standardization), as the company intends to “continue to provide an international certified service to all our clients”. In his keynote address to the ceremony, the Senior Minister at the Office of the President with responsibility for Finance, Ashni Singh that Assuria’s decision to build its headquarters in Guyana is a clear demonstration of the confidence it has in the Guyanese market and the Guyanese economy as a whole.
In examining the insurance sector in particular, Dr. Singh worries that many Guyanese fail to appreciate the importance of acquiring and maintaining insurance policies in their day-to-day lives. “There are many people in Guyana who think that insurance may be something you can afford to do without it or that you take the absolute minimum insurance required because you have to have insurance,” the Finance Minister

He emphasized that, contrary to what many believe, insurance is an essential element in the risk management ‘toolkit’ of any home or company. Minister Singh used the forum to encourage players in the insurance sector to improve their public awareness and education capacity, so that more people understand the importance and benefits of being insured. Furthermore, Minister Singh praised Assuria for taking the step and investing in its regional expansion, highlighting the entity’s success as a demonstration of the possibilities that exist once companies step outside their market spaces domestic. “Just as Assuria saw an opportunity in Guyana, there is nothing to stop Guyanese companies from looking beyond Guyana. There are good business opportunities outside our domestic economic space outside the confines of our domestic economy, ”the Finance Minister noted.
He pointed out that the emergence of the Guyana Oil and Gas sector has seen many local companies improve their operations, thereby positioning themselves to compete effectively with long-standing entities of international standards. “I look forward to Guyanese companies today, becoming major regional companies and major regional conglomerates tomorrow,” said Dr. Singh. Even as he encouraged Guyanese companies to think beyond the borders, Dr. Singh said that Guyana remains conducive to external investments. “We remain open for business, and we continue to be a welcoming environment,” said the minister.

The International Monetary Fund (IMF) has only recently calculated that Guyana’s economic growth is double what it was in 2020. When measuring the country’s Gross Domestic Product (GDP), the IMF’s biennial World Economic Forecast estimates that Guyana is likely to jump from 8.1 percent to 16.4 percent. Questioned by reporters following the turf turning ceremony, Dr. Singh who is not surprised by the IMF’s calculations, noting that the revised projections reflect the astounding optimism that has now returned to the Guyanese economy.
The Finance Minister also believes that the revised figures have much to do with the policies outlined in the last two national budgets. “The 2020 and 2021 budgets have sent a very clear indication of where our Government is taking economic policy and what our intentions are,” said Dr. Singh. The minister also noted that even in the midst of great uncertainty, the Irfaan-Ali Government was able to persevere and return the country to some level of normality. In addition to the emergence of the coronavirus pandemic, Guyana faced dramatic and protracted General and Regional Elections. “That upward revision in Guyana’s growth outlook reflects the IMF’s inevitable response to the clear signal they would have received in relation to Government economic policy and the clear signal of renewed optimism. it’s about Guyana’s economic hope, ”Dr. Singh told reporters. By 2022, the economy is expected to grow another 46.5 percent, and by 2026, economic growth is expected to be around 3.0 percent.