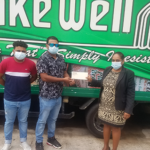 Kaieteur News – “It is common knowledge that sponsorship for sport in Guyana is only unique. The RHTYSC is therefore very grateful that Bakewell has remained steadfast in their last two decades in their support of our Under 17 and Second Division teams. There is no doubt that Bakewell is one of the main reasons why we are widely regarded in Guyana as leading a youth and sports organization. ”
The words of the Secretary / CEO of Rose Hall Youth and Town Sports Club Hilbert Foster as Guyana’s main bakewell Bakewell renewed its annual cricket sponsorship for the 22nd year running.
Foster, who is also President of the Berbice Cricket Board and Vice President of the Guyana Cricket Board, said Bakewell has been an official sponsor of the RHTYSC, MS since early 2000. The company started with the sponsorship of the Second Division team and then the team Under 17. Foster revealed that the two teams have won over twenty different tournaments over the years at the different levels. Bakewell Town’s Rose Hall teams have produced numerous Berbice and Guyana players over the years including Royston Crandon, Assad Fudadin, Shemaine Campbelle, Erva Giddings, Sheneta Grimmond, Kevlon Anderson, Kevin Sinclair, Junior Sinclair, Keith Simpson, Jonathan Rampersaud, Mahendra Gopilall, Jeremy Sandia, Sylus Tyndall, Dominic Rikhi, Abdel Fudadin, Khemraj Mahadeo, Brandon Prashad and Matthew Pottaya. Fudadin, Kevin Sinclair, Esuan Crandon, Royston Crandon, Kevlon Anderson have all gone on to play for the West Indies at various levels.
Foster cited Bakewell’s support over the years as it allowed players to perform on the cricket pitch without thinking about the expenses associated with the cost of playing the game.
The two teams over the years have also run hundreds of personal development programs under the name of sponsorship. Both teams are forced by club managers to complete between 50 and 60 activities a year. These include a food hamper program, a cricket academy, an elderly breakfast program, TV programs, a cleaning campaign, Say No to Drugs, Say Yes to Education and Say No to Suicide.
RHTYSC Assistant Secretary / CEO Simon Naidu revealed that in 2021 the Under 17 team would be led by Christopher DeRoop, while Matthew Pottaya would act as his deputy. The talented Kevlon Anderson would lead the second division team with Junior Sinclair as deputy. Naidu assured Bakewell Managers that both teams would maintain their high standards in the past and remain ambassadors for the company’s good brand role model.
Bakewell General Manager Rajin Ganga said his company was delighted with the teams’ performance on and off the cricket pitch. Both teams noted that they had played a great role in making Bakewell a household name in Berbice.
Ganga expressed confidence that the relationship would continue to be strengthened in the future. Bakewell besides sponsoring both teams also co-sponsors a number of other activities including an awards ceremony, an annual magazine, a cricket academy, a Christmas village, a mother’s day program and an annual father’s day program for the club.