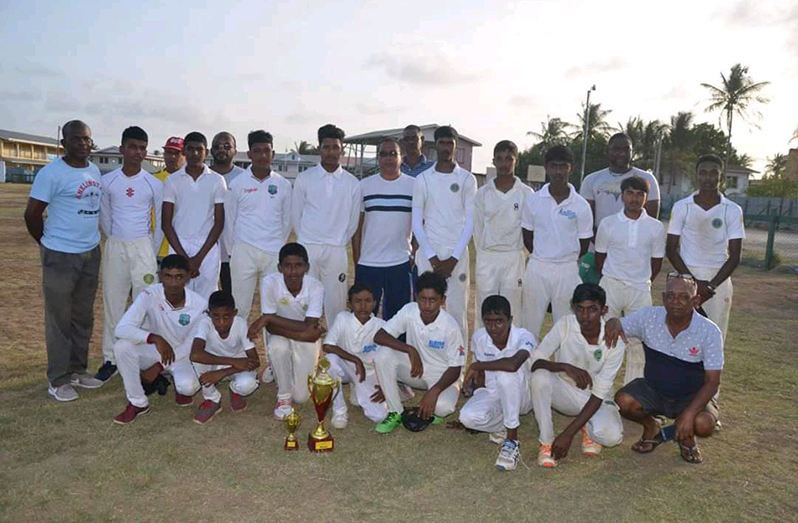 … 2021 is predicted to be the most successful in history

THE Berbice Cricket Board (BCB) and president Hilbert Foster anticipate a historic 2021 for cricket in the Old County, following a highly successful 2020, run by COVID.
The board has described the year 2020 as extremely successful despite being able to play the game for only the first three months of the year.
After taking a break during April, BCB achieved great success off the cricket pitch through its charity works, training programs, awards ceremony, pro-educational campaign and investments in youth clubs and players.
Foster, who was elected president in February, 2018, noted that unlike the other cricket boards in Guyana, BCB has much to celebrate as it continues to work hard despite the pandemic.
Thirteen cricket tournaments were started or completed between January and March while several others were also waiting for the restart of the cricket season to be completed.
Rose Hall Town NAMILCO Thunderbolt Flour defeated arch rivals Albion to win 40-over Champions Busta, Ivan Madray’s 20/20 Cup in January and also past Tucber Park to win the STAG Beer 50-over tournament.

Albion Second Division Raffik Construction won 100 Balls and Ramnaresh Sarwan Under-17 titles while Bakewell Town’s Rose Hall won the Lower Corentyne Let’s Bet 20/20 tournament. Metro Rose Town’s Female picked up the 2020 Nand Persaud female title while No.73 won the BCB / UCCA / Under-Stand Trophy. The BCB / UCCA Inter-Primary School tournament was won by No. 71 Primary Schools.
The Asphalt / TR Construction 20/20 Premium for teams in the Lower Corentyne area, which began in January, 2020 is at the final stage while the Lewison’s General Store and Mike’s Pharmacy Under-15 tournaments are also in the semi-final stage.
The BCB / UCCA Price is Right tournament is also in the final stages with Dukestown and No. 72 Cut and Load to battle for championship honors.
Other tournaments postponed due to the ongoing COVID-19 pandemic are the two-day Banks DIH Ltd (semi-final), Let’s Bet Sport Countywide (finals), Friends of New Amsterdam 20/20 (semi-final), and NBS 40 overs (Finals).

BCB and RHTYSC also invested in publishing educational posters, youth information booklets, COVID-19 posters and a Say No to Crime information sticker.
Sixty-nine youth cricketers received school bags while six outstanding cricketers who did well at CSEC received a cash pay of $ 10 000 each.
Former West Indies player Ramnaresh Sarwan also provided BCB with a $ 100 000 training package to assist in the development of youth players. Jerry Karim of Blairmont received Brian Ramphal’s Father of the Year while Veronica Cecil was named Brian Ramphal’s Mother of the Year.
The board also worked with Rose Hall, MS Youth and Town Sports Club in a COVID-19 response program that saw the distribution of over 6 000 food hampers, 2 000 lbs of chicken products, face masks, cleaning detergents and detergents.

Shepherd became the latest Berbician to score a first-class century. The proactive board also created history when it awarded its first ever educational scholarship to the University of Guyana with sponsorship from the Ministry of Agriculture.
The year ended with a donation of $ 1.5M worth of cricket equipment and uniforms from former West Indies opener Clayton Lambert.
The BCB also played a major role in the funeral arrangement for the legendary Butcher Basil by holding a Reflection Night at the Port Mourant Ground and co-ordinating his funeral service. In 2020 Berbice Cricket also mourned the death of referee Ganga Persaud Shivdyal and Jerome Andrews players Sherwin Murray.
The board would like to acknowledge the contribution of the media especially Kaieteur News, Stabroek News, Guyana Chronicle, Guyana Times, DTV-8, LRTVS CH10, NCN, NTN and News Room.