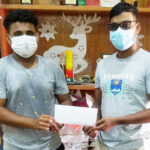 Kaieteur News- The Berbice Cricket Board as part of its ongoing efforts to invest heavily in youth development has agreed to host four inter-zone Knockout Under 19 Cricket tournaments across Berbice. The Zones would be Upper Corentyne (including Black Bush Polder}, Central / Lower Corentyne, New Amsterdam / Canje / East Bank and West Berbice. The Under 19 tournaments would be one of three tournaments played in each of the sub-zones as part of an aggressive cricket development program.

Last Thursday, Board President Hilbert Foster received sponsorship from two sponsors for the Berbice Upper Corentyne and New Amsterdam / East Bank Berbice tournaments, while Guyanese from overseas committed to sponsor another in June for teams in the Lower Corentyne area . Contractor Tevindra Jagdeo of Premium Asphalt Inc. would sponsor the New Amsterdam / Canje / East Bank Berbice tournament. Teams expected to play in that tournament would include Kendall Union, Rose Hall Canje, Tucber Park, Mt. Sinai, Guymine, Edinburgh and East Bank Blazers. The games would be played in the wit of Canje, Edinburgh and Kendall’s Union venues

ie a final set for the Edinburgh Ground.
Contractor Mohamed Ahmad of Mohamed Ahmad Construction Ltd is the sponsor for the Upper Corentyne stage of the tournaments. Teams to play would include No.73, Scottsburg, Skeldon and Radha Krishna Academy.

Meanwhile, Guyanese Rickey Itwaru from overseas has agreed to sponsor the Lower Corentyne tournament which would be played in June at

Albion Sports Complex. The teams to play in the tournament would be Albion, Rose Hall Town Pepsi and Port Mourant. Itwaru, a certified special needs teacher based in the United States, said he was very impressed by the development of Berbice Cricket and that was the main reason why he contacted BCB to sponsor the tournament. The BCB is currently about to secure the fourth sponsorship of the West Berbice subsidiary and an announcement would be made soon.

Foster, who leads the BCB Marketing effort, revealed that in one month the board had secured sponsorship for twenty-four tournaments and that the tournament of the four indoor zones would be followed by a county-wide under-19, 50 Overs team, which would be sponsored by the New York Business Group.
The main goals of the four in-house tournaments would be to encourage youth players to join clubs in their areas, identify promising players for the BCB Elite Coaching program and allow various clubs throughout Berbice to win BCB titles. Foster noted the cooperation of District 6 Regional Executive Officer Navindra Persaud, with whom he was a true friend in the field of cricket development. Persaud played a major role in securing sponsorship for the proactive board. He also thanked Mr Jagdeo, Mr Itwaru, Mr Ahmad and Mr Uborn France for their support.