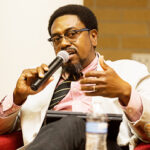 Kaieteur News – Oil will come and go. But if a country really intends to exploit this resource in the long run, its best bet would be to invest its proceeds from the new resource, in the nation’s traditional agriculture sector.
This is according to Dr. Terrence Blackman, Associate Professor of Mathematics at Medgar Evers College, New York, USA during a recent interview with Kaieteur Radio, Guyana’s Oil and Chi moderator, Kiana Wilburg.
She was at the time researching Professor Blackman’s views on the issue of diversifying the country’s earnings base using its new oil and gas wealth.

Professor Blackman noted that, although he believes that agriculture is an important Sector, it has not always been an appealing prospect for many people in the country.
Be that as it may, the Guyanese in the United States said it must be acknowledged that the food import bill for the region only, is a huge opportunity for the country. Professor Blackman recalled that at the time his mind referred to the issue of Guyana’s spending on its oil resources, the regional food import bill was about US $ 4B.
He asked that Guyana use only 10 percent of that, it would mean earning some US $ 400M annually and that this is, “is the opportunity we have as a nation right now; we have this money but this money is not going to last. ”
Professor Blackman qualified his position by underlining that when oil operators in the Stabroek Block have depleted reserves, it would not be replenished.
“Once they take the oil, we can’t replace it,” he said, and then continue to explain, “it has taken millions of years for this oil to be there so once you use it, there we are; now you have these pieces of paper (money) in a federal reserve bank. ”
With this in mind, Professor Blackman suggested, “the bet we have to make is on agriculture and if we can do agriculture right, then I think we can actually beat the resource curse. ”
Further reinforcing his argument and calling for the development of a clear plan of how the country intends to spend its oil and gas earnings, Professor Blackman highlighted how much of the nation’s arable land is available for agriculture, in addition to the fact that, “We’re not a very populated place.”
He also highlighted climate change and renewable energy questions that must be included in any long-term spending plan to implement it.
Undermining the world’s move towards cleaner energy sources, he asked “We are currently where it is tipping; we have to take this money and use it as an opportunity to pivot to something else. “
According to Professor Blackman, the Guyanese population will ultimately have to live with whatever decision is made to pursue something else, but “for me I see agriculture as the way.”