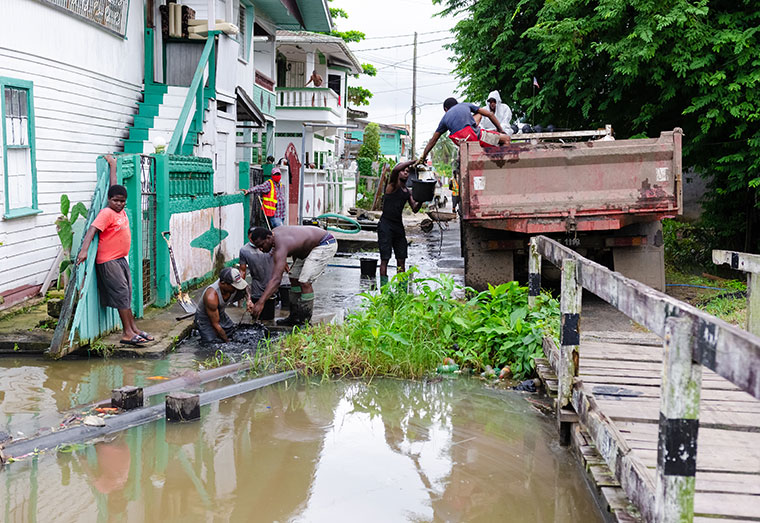 NIGHT with heavy rainfall on Monday, the Albouystown-prone area of ​​Georgetown has had little or no backlog of standing water; this is mainly due to the recently launched clean-up led by the Ministry of Local Government and Regional Development and a few young people from the community.
Subject Minister Nigel Dharamlall on Monday commended the young people for the work they have been doing to clear the drains and lanes of the community. The minister revealed that the residents were fully supportive of the project, and had been working alongside the ministry to facilitate and carry out such work.
“Georgetown residents really came out to support this cleanliness and improvement exercise. We have been able to achieve many things; we’ve been able to clean different wards, and we’ve been able to reduce flooding, especially in Albouystown, ”Dharamlall told the Guyana Chronicle.

During his visit to inspect the completed works, residents told the minister that, had the drains not been cleaned, the area would have been flooded on Monday. According to Minister Dharamlall, the residents have indicated their willingness to form a partnership with the ministry to envisage even more development projects in the area.

“I think that’s going to be ongoing,” he said, adding: “I’m happy that the residents have told me they are going to work with us to enhance the current circumstances of the area . And as a government, we will continue to put resources into the development of the psychological and social infrastructure of different Georgetown wards. ”

The clean-up operation has seen over 15 young men in the community.
“We have also had the effect of creating employment opportunities. Over 15 people are employed; so money goes into the small communities. So that’s another effect too. ”

Reiterating his commitment to the project and to the community, the Minister said, “As a government, we would like to commit to our residents and the citizens of Georgetown; we will be working with them to upgrade the city, and we will be doing much more infrastructure work on roads and drains, and on improving our city on the infrastructure of the markets. ”

Minister Dharamlall said that over the next few years, works of a similar nature will be intensified in Georgetown, particularly in the inner-city communities there.