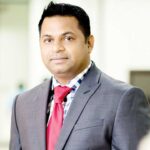 BK Int’l received 70% in payments, but only 15% of work completed for Region 2 sea defense

Kaieteur News – Caught red in another example of his blatant disregard for contractual obligations is BK International Incorporated by Brian Tiwari. In this latest case brought to the notice of this publication, BK International received 70% of the payment for a $ 124M sea defense project over a year ago but has only been able to deliver 15% of the work complete. Junior Public Works Minister Deodat Indar shared disclosures, during his visit yesterday to a sea defense site in Plantation Andrews, Region Two.
This $ 124M project was signed and awarded on December 31, 2019 – a controversial period when the former administration of A Partnership for National Unity + Alliance For Change (APNU + AFC) was considered in caregiver mode.
Nevertheless, the project was awarded and aimed to repair 1,000 feet of rip rap sea defense in the coastal village of Essequibo, with start and completion dates such as January 21, 2020, and August 21, 2020, respectively.
However, during his visit to the project site yesterday, the minister noticed that BK International had completed just 150 feet of work, despite the contractor collecting nearly $ 90M in payments.

Minister Indar recalled that BK’s disregard for contractual commitments at Plantation Andrews was similar to that shown by the same contractor for a $ 352M sea defense project in Dantzig, Region Five. There, BK received a $ 105M advanced for “emergency” sea defense work in June 2019. This followed the powerful tide of October 2019 destroying vulnerable parts of coastal Guyana, with thousands of families living near the shoreline battling to keep their property, livestock and farmland from being damaged by salt water that had broken up coastal land.
But even after receiving $ 105M from the previous government, BK had started zero mobilization work on the allegedly urgent project. As a result, when the People / Civic Progressive Party came to power in August last year, one of its first steps was to terminate the $ 352M contract with BK. It was later transferred to two other local contractors.
“BK International has once again been performing defaults at times and I’m telling you we can’t continue to have this anymore. We cannot use taxpayer money for vulnerable areas to see that it is not completed on time and lack of due care, ”Minister Indar expressed, stressing that” drastic action “will be taken against this contractor.
Attempts were made by Kaieteur News yesterday to contact Brian Tiwari, CEO (CEO) of BK International, with a view to finding an explanation for his breach of contract agreement. However, those efforts have been futile.