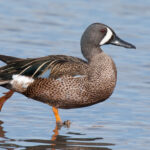 Kaieteur News – Blue duck (Anas discors) is a North American double duck. It was probably found in the territories of South America as well. The scientific name derives from the Latin Anas “duck”, and discors, “variant”, which may refer to the striking facial pattern of the male.

The blue teal is 40 cm (16 in) long, has a wingspan of 58 cm (23 in), and a weight of 370 g (13 oz). The adult male has a pale blue head with a white face crescent, a light brown body with a white patch near the back and a black tail. The adult female is brownish brown, and has a white area at the bottom of the bill. Both sexes have blue sky wings, green spectrum, and yellow legs. They have two volts a year and a third volt in their first year. The male call is a short whistle; soft quack is the woman’s call.
The location of the green teal or discus Anas in the genus Anas is by no means certain; a member of the “blue wing” group that also includes the shovelers, he may be in a better position with them in the separate genus Spatula. It is not a duck in the harsh sense, and does not appear to be as closely associated with the garganey as has been believed for some time. Indeed, its color pattern is strikingly reminiscent of the Australasian shoveler.
DNA analysis of this species has revealed that it is genetically closely related to cinnamon teal, another American fly with blue wings.
It is often found wintering as far south as Brazil and central Chile.
Blue fin teal live on the shoreline more often than open water and prefer calm water or sluggish currents to fast water. They inhabit inland marshes, lakes, ponds, ponds and shallow streams with dense dense vegetation. In coastal areas, breeding occurs in saltmarsh meadows with adjacent ponds or creeks. Blue-green teal uses rocks that protrude above water, muskrat houses, logs or fallen limbs, bare sections of the shoreline, or mudflats for resting sites.
Blue fin teal winter on shallow inland freshwater marshes and saline and saline marshes. They build their nests on dry land in grassy sites such as bluegrass meadows, hay meadows, and sedge meadows. They also nest in areas of very short, sparse vegetation. Blue teal generally nest within hundreds of yards of open water; however, nests have been found as far as 1.61 km (1 mile) away from water. Where the habitat is good, they nest communally.
Blue-winged teal often uses heavy crumbs of crumbs and catapults as an escape cover. Grasses, sedges, and haylage provide nest cover for these ducks.
These birds feed by doubling in shallow water on the edge of marshes or open water. They eat mostly plants; their diet may include molluscs and aquatic insects.
Blue fin teal are generally the first ducks south in the fall and the last to the north in the spring. Adult drains leave the breeding grounds well before adult chickens and immatures. Most blue fin teal flocks seen after mid-September consist largely of adult chickens and immatures.
The onset of love in immature fin tees often begins in late January or early February. In areas south of the breeding grounds, blue fin teal is more active in courtesy during spring migration than most other ducks.
Blue-winged teal is one of the last doubles to nest, generally breeding from April 15 to May 15. Few nests are initiated after mid-July. Nesting chronology may vary from year to year due to weather.
They generally lay 10 to 12 eggs. Delayed nesting and relocation efforts have a significantly smaller clutch, on average between five and six eggs. The size of the clutch may also vary according to the age of the hen. Annivers tend to install a smaller clutch. Incubation takes 21 to 27 days. Blue fin teal are sexually mature after their first winter. During incubation, the drake leaves his friend and moves to a suitable molting cover where he goes flying for three to four weeks.
Blue fin teal ducks can walk to water within 12 hours of hatching but do not commit until six to seven weeks.
Blue fin teal feeds on the surface and prefers to feed on mudflats, in fields, or in shallow water with floating vegetation and shallow underwater along with an abundance of small aquatic animals. They eat mainly vegetative matter containing seeds or stems and sedges, grass, seaweed, seaweed (Polygonum spp.), Duck (Lemna spp.), Widgeongrass, and muskgrass (Chara spp.).
The seed duck of plants growing on mudflats, such as nuthatch (Cyperus spp.), Smart, millet (Panicum spp.), And Rice Cutting Grass (Leersia oryzoides), is actively eaten by this duck. One-fourth of the food eaten by a teal is animal matter such as molluscs, crustaceans and insects.
Common predators of bluetongue include humans, snakes, snapping turtles (Clycha serpentina), dogs, muskellunge, American crows (Corvus brachyrhnchos), magpies (Pica spp.), Ground squirrels, coyotes (Canis latrans), foxes (Vulpes fulva), gray foxes (Urocyon cinereoargenteus), raccoons (Procyon lotor), long-tailed weasels (Mustela frenata), American mink (Mustela vison), striped skunks (Mephitis mephitis), spotted skunks (Spilogale putorius), and American badgers ( Taxidea taxus). (Source: Wikipedia)