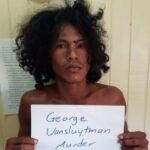 Kaieteur News – Yesterday a boat captain was set to stand trial in the High Court for murdering his father-in-law. He is accused of ramming his boat into the man.
The accused, George Vansluytman, 38, of Port Kaituma, Northwest District (NWD), Region One, appeared via live video before Magistrate Dylon Bess.
At the end of the preliminary investigation (DP) of the murder, the magistrate ruled that Vansluytman had enough evidence to stand trial in the High Court for the murder of 67-year-old Dennis Welcome. He is due to go on trial at the next sitting of the Assassination Demerara.
Vansluytman was not required to plead to the indictable charge on his first court appearance. The accusation alleged he killed Welcome on July 28, 2018, at Canal Bank, Port Kaituma.
According to the facts of the charge, around 03:00 hours. Vansluytman, who appeared to be under the influence of alcohol, returned home threatening his wife. Vansluytman allegedly grabbed the woman’s neck and put a spoon to her neck and told her he would kill her.
The woman then raised an alarm and her father rushed to her aid and later carried her home.
At about 07:00 hours, Vansluytman traveled by boat to the Welcome residence. Upon arrival, Vanslytman saw Welcome sitting in a boat allegedly using his vessel to ram the other. As a result of the impact, Welcome fell into the water and was unable to resurface.
An alarm was later raised and the body of Welcome was found and transported to Port Kaituma Hospital, where he was pronounced dead. The matter was reported and the accused was later arrested and charged with murder.