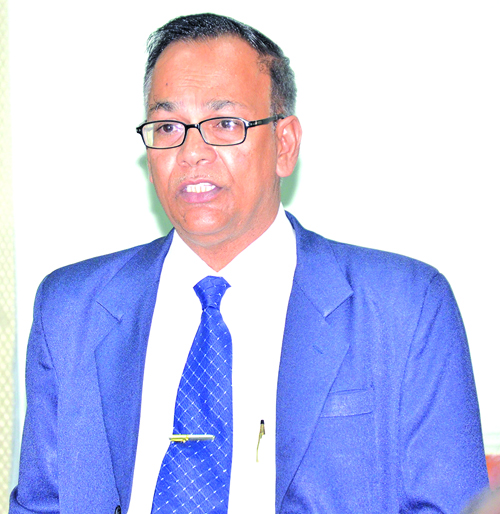 Following a special investigation into the Sussex Street bond scandal, Georgetown, the Guyana Audit Office has found a clear breach of the Procurement Act and recommended that the Police be called in and that the Ministry of Legal Affairs take disciplinary action where necessary need.

According to the special audit report compiled by the Auditor General Deodat Sharma and referred to the Attorney General and Senior Counsel Anil Nandlall, the medical storage bond contract was not publicly advertised or procured by the before A Partnership for National Unity / Alliance for Change. (APNU / AFC) Government. This is in breach of the Tender Board procedures and the Procurement Act 2003.
The Ministry of Public Health at the time had always claimed that they rented the bond from Linden Holdings Inc. because it was needed on an emergency basis. However, the Audit Office found that while $ 25 million was paid for the first two months, the bond was rented (July and August 2016), the bond was not used until the third month.
Another issue is the fact that the bond is underutilized and under-equipped, despite contractual conditions. For example, the contract required the building to have 16 upright refrigerators. But at the time of physical verification on April 11, 2017, only 14 were seen.
“The contract stipulated that there should be central air condition at both levels and a contingency of twelve 18,000 BTU air conditioning units. However, a physical check revealed that ten of the units were 18,000 BTUs, while two were 12,000 BTUs, ”the AG also found.

In addition, physical verification carried out by the Audit Office in 2017 found that the bond contained only 472 IUD and related supplies and 1200 umbilical cord clamps. In addition, there were 2130 amphotericin 50mg injections and 8300 condoms.

Contract
There is also uncertainty about the date the contract actually ended. The contract was supposed to last from June 1, 2016, to June 30, 2019. In line with the need for a year’s notice, the Permanent Secretary of the Ministry of Public Health, Trevor Thomas, then sent an initial Notice of Exit letter dated October 31, 2016, notifies Linden Holdings of the intention to vacate the building by November 1, 2017.
“However, an examination of this letter revealed that it was signed and issued without the Ministry’s official letterhead. There was evidence of someone signing a Document Transfer Slip on 8 November 2016 receiving the Notice to Quit, ”the AG said.

Furthermore, Linden Holdings Inc., owned by Larry Singh, has always argued that the Notice to Quit is not valid due to the lack of a letterhead or official stamp. This was quoted by Singh’s lawyer, the late Senior Counsel and former Acting Chief Justice Ian Chang, back in October 2017.
In addition, Chang had stated that the Notice to Quit had no “due cause”. In the letter, Singh’s legal team had alleged that the deal continued for its fixed three-year term until June 2019, in which case the Government would have $ 137.5 million owed to it without the brink of a $ 12.5 million security deposit.
“Mr Chang said his client Linden Holding Inc rejects any wrongful censure by the Ministry and chooses to treat the 1 June 2016 Tenancy Agreement as existing beyond 31st October 2017 until the end of the fixed term of three (3) years. ie until 30 June 2019, ”the AG found.
However, former Attorney General Basil Williams had sought a legal opinion on the matter and the law firm Hughes, Fields and Stoby had given such sum in the amount of $ 690,000. According to the legal opinion, no further charges should be made to Larry Singh “given that the Tenant had given notice, and left the premises on the 31st day of August, 2018.”

Recommendations
In his recommendations, the Auditor General urged that the Ministry of Legal Affairs be engaged “with a view to bringing this matter to an end and, if necessary, appropriate disciplinary action being taken against any officer (s) ”And that“ Guyana Police should be called to conduct a detailed investigation and establish charges where necessary. ”
Larry Singh, who was recently sued for another multi-million dollar contract (this time over the failure to supply weapons and ammunition) came to prominence back in 2016, when it was revealed when considering Financial Papers, that the former Government was renting The Sussex Bond street has it for $ 12.5 million a month for storing drugs and medical supplies.
It was also discovered that $ 25 million was initially spent as a security deposit, in addition to $ 12.5 million, representing monthly rents between August and December 2016. The exploding criticism then led President David Granger to establish a Cabinet sub-committee to investigate the major and make recommendations.
That committee included former Minister of Natural Resources Raphael Trotman as the Chairman, former Prime Minister Moses Nagamootoo and then Minister of State Joseph Harmon. The committee concluded that the contract should be terminated or renegotiated as a similar facility could have been discovered at a cheaper rate.
During the December 2017 Budget debate in December 2016, a parliamentary delegation along with the media visited the Bond and found condoms, lubricants and some unused fridges, but no pharmaceuticals and medical supplies. By the time the Government at the time left the arrangement in 2018, the businessman had already paid over $ 300 million for the bond. (G3)