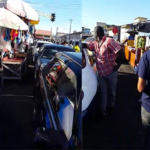 – Mayor says Council is waiting for paint to move forward

Kaieteur News – Drivers of short hire / drop off cars at East Bank Park located in the Stabroek Market area are still waiting for the restoration of their allocated parking spaces where they would normally congregate to pick up passengers. This was revealed by one of the drivers who spoke to Kaieteur News yesterday. He said the Mayor, Ubraj Narine, failed to honor his commitment to restore their parking space.
Narine had engaged the drivers after they complained about being moved from their parking spaces by police ranks. This, they said, left many of them out of work, struggling to survive and provide for their families during this Christmas season.
This newspaper had also reported on the drivers’ complaints about beer stands occupying the place they had been moved from although the police had moved them to clear the road. The beer stands are characterized by the setting up of ice-cold refrigerators to cool the beer for sale complemented by benches where people sit to hang out, according to drivers.
Last December 1, over 60 drivers met with the Mayor and were told that the Mayor of Georgetown and the City Council would restore their designated area for parking, enabling them to earn an income and maintain their families.
Kaieteur News contacted the Mayor yesterday to inquire about restoring the area. He explained that the Council had not procured the correct paint to cover the no parking sign installed there, preventing drivers from parking.
He said that the Council had collected paint but it was not the right one and despite efforts to find the right paint in several local organizations, they were unable to do so. He said the Council was still trying to find the paint and the no parking sign would not be repainted immediately as soon as it was acquired.
Currently, only five to six cars can occupy a small designated driver space, leaving most of them unemployed. The drivers expressed disappointment at being moved from their parking area and having beer stands replaced. “It’s unbelievable. As a little guy, you come out for your daily bread just to get your income off. Is madness! If we are moved and the road is still clear then we would understand, but these people are selling beer and liming in the midst of a pandemic. Isn’t it slackness? Yes, ”one of the drivers had said.
They argue the Mayor is due to repaint the area since Dec. 6 and weeks later, they are struggling to make ends meet in the midst of a pandemic.