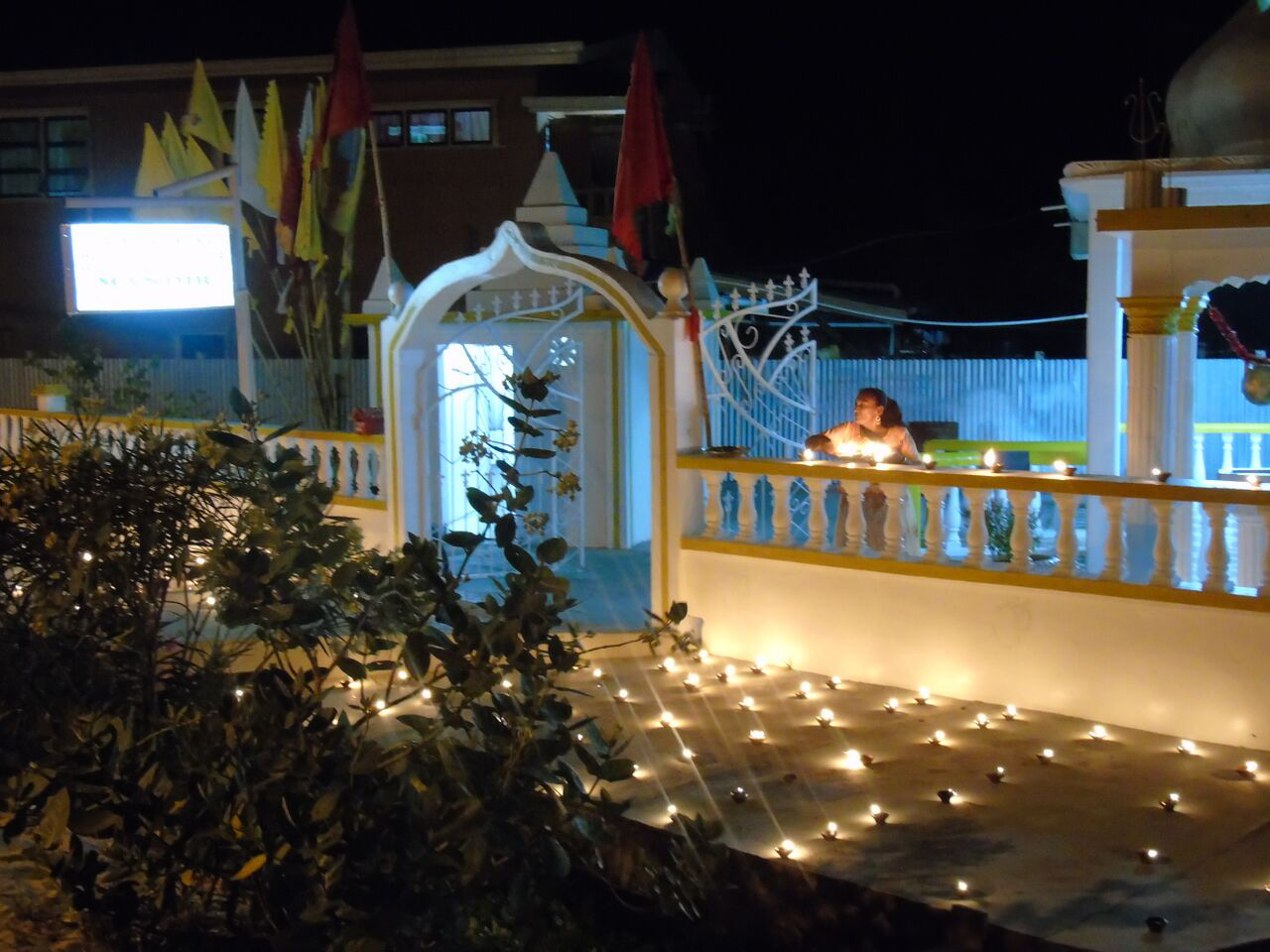 Diwali – the Festival of Lights is celebrated by Hindus worldwide mostly with rows of lights that illuminate the world on what is considered the darkest night of the year. During Diwali that marks new beginnings, lamps are lit to celebrate the triumph of good over evil, fire craftsmen begin to drive away evil spirits, and prayers for prosperity are offered to Lakshmi, the goddess of wealth. However, while the festival is celebrated for a variety of reasons, the main theme running throughout is the triumph of light over darkness.

This is especially true in the case of the Sanathans. Pandit Lakeram Deodhari who hails from a long line of pandas said that when he was a young man he knew “celebrating Diwali was about enlightenment [diyas] but you do not know what these things mean or why you do it. ”It was only as he got older that he learned the significance of the Hindu festival. “As I took part in the religion and activities I read, I learned that Diwali is about getting rid of evil; remove darkness, bring light to your home. Because it really means good over evil. ”

Moreover, he added, cleanliness plays a big role in the preservation. “People would clean the whole place and think that looking at this day when I light this diya, Lakshmi Maa is going to be present in this home to shower us with health, wealth and prosperity . ” Without these he said, “The home has no meaning”. With the presence of health, wealth and prosperity, it is believed that the home will experience peace. “So people who light diyas know that the light will bring brightness to their lives.”

He was quick to add though, that “removing darkness and creating light does not mean night and day. In your life there can be many representations of darkness.

“Some people do not have happiness or may encounter difficulties or obstacles causing them to be unsuccessful in life, so with the lighting of the diyas with faithfulness and devotion you think Lakshmi can get rid of all this and make you happy; not only physically but spiritually as well. ”

Add to this the fact that all Hindu religious books are now being translated into English, “more and more people are celebrating because they now know what it means. So you find now not only Hindu people who light diyas but others who know the meaning of the lights. ”

With this, some people, both Hindus and non-Hindus, have taken to incorporating the use of fairy lights into their Diwali celebrations. And according to the Pandit, “There is no difference between the diyas and other sources of artificial light. Different colors of light mean different aspects of life. ”He explained that using the fairy lights allowed devotees to appeal to the different facets of goddess Lakshmi. “Blue means endless love; yellow mother, general; red, all mothers defeated. So all the colors represent different aspects of Lakshmi Maa, ”he revealed.

He further noted, “In those days, people used diyas because there was nothing like current [electricity]. So people lit lots of diyas. Now there’s a current, and with that people use other light sources to beautify the place. ”

Some Hindu devotees believe that Diwali was originally a harvest festival. And as such, the Diwali for Arya Samaj group for example, means harvest time: celebrating someone’s blessings and prosperity at the end of a generous harvest. To this end, celebrants would cleanse their homes in preparation of the day, dress in their day clothes and take their produce to the temple as offerings to god as a thank you for another successful harvest. “When I was little and I know Diwali time, we used to clean the house in preparation for Diwali,” remembers Kewalpatie Dayaram.

He added “I remember my dad used to buy new clothes and we would wear it for the first time on Diwali day.” According to Arya Samajist, “On Diwali day we would go to the mandir and we spend time making havan [a ritual in which offerings are made into a consecrated fire] and it is harvest time. ”Dayaram remembers devotees bringing the produce from their gardens and other items including sweet meats to those special services. “Since I was small and went to the mandir in Adelphi, they use them to bring lots of things that grow in the yard or at the farm: paddy, mango, banana, coconut; and some people would make sweet meats and they take them to the mandir and they share it, ”said Dayaram. He also often stated, “They would have a ‘come and buy’ sale and the money goes to the mandir.” Dayaram explained “The sale was usually an auction sale with items being offered individually to the highest bidder. ” This practice is still an integral part of their annual Diwali celebrations to this day.

For Dayaram though, making the diyas of mud is one of the favorite activities she remembers from her youth when celebrating Diwali. “We used to do it when I was a little girl. Every year, the day before Diwali we use to make diyas of white mud and put it to dry in the sun and it would be difficult. ”Now though, diyas are bought from the store.

As well as celebrating Diwali as a harvest festival, members of the Arya Samaj movement observe Diwali day as a memorial day for the movement’s founder, Dayanand Saraswati. On Diwali day, Arya Samaj founder Swami Dayanand was murdered. And as with tradition, the death of great souls like him does not mourn, but be celebrated. Swami Dayanand was said to have survived 13 attempted murder on his life through poisoning, but he surrendered to the 14th an attempt that took place on Diwali in 1883.

“We usually light diyas but our reasons for doing so are to celebrate Rishi Nirvaan on the day that Swami Dayanand died,” explained Dayaram. “So we celebrate it by lighting diyas and going to the temple to worship and reintroduce ourselves to spread its many truths.”

Coinciding with the Hindu New Year, Diwali usually falls between mid-October and mid-November, although this is determined by the Hindu lunar calendar. The festival of lights celebrates new beginnings and while each Hindu branch has its own reason to celebrate the festival, one of the most popular stories told is the story of Lord Rama and his wife Sita returning to a kingdom in northern India from exile after the defeat of the demon king Ravanna in the 15th century bc. So the lighting of diyas and large devotional fireworks displays reminds one of the celebrations that happened as the legend tells it, after Rama returned as villagers lit earth lights to lead his path and turned off their version fireworks.

From this, the Hindu devotees who worship the Mother Kali and refer to themselves as ‘Madras’ take inspiration to celebrate Diwali. According to Narine Dhanpat who identifies with the Madras group, Diwali is about mutuality, unity and obedience. These themes, he says, the Madras believe, are all present in Ram’s story. “Lord Ram was an exile but he did not rebel against his parents’ wishes, quietly accepted their decision and obeyed. Sita also stood by his side and suffered them all and they were rewarded at the end when the villagers united to light their path out of exile, ”said Dhanpat. It is this feeling of unity and trying to emulate the story of Lord Ram, which is why these Hindu devotees celebrate Diwali. However, Dhanpat believes that the reason they originally celebrated Diwali began to fade as people moved away from each other. “Diwali means unity and back in the days we had more unity than now,” he lamented. “Everyone is becoming too skeptical now that they are not as cooperative as before; even for community service, they do not mix as before. Further elaborating, he said “These days you had to ask; the first time you didn’t have to ask for things to decorate the temple and stuff, people volunteer to give it to you. Now you have to ask, and even when you do, it doesn’t guarantee you’ll get it. “

Nevertheless, Dhanpat and his family still celebrate Diwali every year with a lot of energy. “Traditionally people use diyas, but as time goes on people are starting to use candles and now fairy lights because oil and things are expensive. But we still light diyas and share some sweet meat for our neighbors. ”

Apart from lighting traditional soil diyas and decorating their houses with colorful rangoli artworks (patterns created on the floor using rice or colored powder) to celebrate the festival of light, during Diwali, family and friends share sweets and gifts and there is also a strong belief in giving food and goods to those in need.