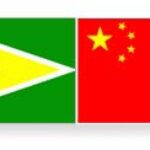 Flag of Guyana and China

Kaieteur News – The Chinese Embassy, ​​in a statement late last night, rejected the “erroneous comments” made by US Southern Command Commander, Admiral Craig S. Faller, during his interaction with the media at State House.
“On January 12, during his visit to Guyana, the US Southern Command, Admiral Craig S. Faller, mistakenly reported that 300 Chinese fishing boats had recently been entered into Ecuador’s Unique Economic Zone (EEZ) however, the Chinese side has repeatedly denied the allegation, ”the Embassy said in a statement, strongly opposing such rhetoric.
The Embassy explained that it is widely known that the high seas of the southeast Pacific are traditional fishing grounds for different countries and in addition to China; fishing vessels from other countries also operate in the region.
He further stated that, as a large fishing-responsible country, “China has always placed great importance on protecting the marine environment and resources, and has exercised the strictest control and control measures over fishing vessels operating overseas.”
The Embassy made clear that China has not found any Chinese fishing vessels operating inside Ecuador’s EEZ and has not received any reports that Chinese vessels have been illegally located by regional fisheries management organizations .
“China will continually fight a ‘zero tolerance’ approach to any form of illegal fishing and be prepared to work with all international countries and organizations to promote conservation and the long-term sustainable use of global fisheries resources,” said the statement.
In conclusion, the Embassy urged that if Guyana found any factual evidence of Chinese ship fishing in Guyana illegally and provided the evidence to the Chinese Government, “we will never tolerate it but deal with it in accordance with applicable laws. ”