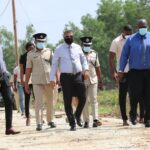 Kaieteur News – The Ministry of Housing and Water through the Central Housing and Planning Authority (CH&PA), is currently relocating 11 informal settlers living in parts of Plot 1767 and 1768 from Cummings Lodge (Cummings Park), Greater Georgetown.
According to a statement from the Ministry yesterday, the Minister for Housing and Water, Collin Croal, visited the area with CH&PA CEO Sherwyn Greaves; Ministry Permanent Secretary Andre Ally; and officers from the Community Development, Projects and Enforcement Departments.
Minister Croal said that while the area has been earmarked for a new housing project to accommodate 190 low-income homes, the illegal activity will severely hamper development.
Nevertheless, the Minister highlighted the government’s commitment to providing housing for all Guyanese, as he outlined the Ministry’s approach.
“We have been working with squatters in this area since August last year and a number of vacant structures have since been demolished. However, the remaining 11 structures are those found to have occupants. They have been issued notices to remove them and we have had our Community Development Department working with them, ”said Minister Croal.
“They have received their final cut notices and assistance is being provided to remove them immediately,” the Minister continued.
The informal settlers, according to the notices served, are due to be moved by Saturday, April 10, 2021. The CH&PA announced that it is currently in the process of relocating the squatters to a suitable area in the vicinity.
Initial reports indicated that 13 breach notices had been served on 13 structures observed by the CH&PA on August 20, 2020. By August 27, 2020, 22 structures had been observed and a demolition exercise was conducted on October 13, 2020, leaving 11 of occupied structures. Several ‘Drop In’ Notices have also been served and since then six of the informal settlers have contacted the CH&PA. The final breach notice was served on April 3, 2021, the CH&PA revealed.
Based on interaction with the squatters, eight have applications within the CH&PA system, while a further three are in the process of making a formal application to facilitate the relocation process.
The Minister was also accompanied by a high-level team from Guyana Police, including the Superintendent of Police, Mr Calvin Brutus; Deputy Commissioner (s), Mr. Clifton Hicken; and Divisional Manager “4A”, Mr. Simon McBean.
This, the Minister said, is to improve safety in the area given the scale of the development. It was noted that discussions with officers had indicated that an outpost was being installed towards the end of the Aubrey Barker project.