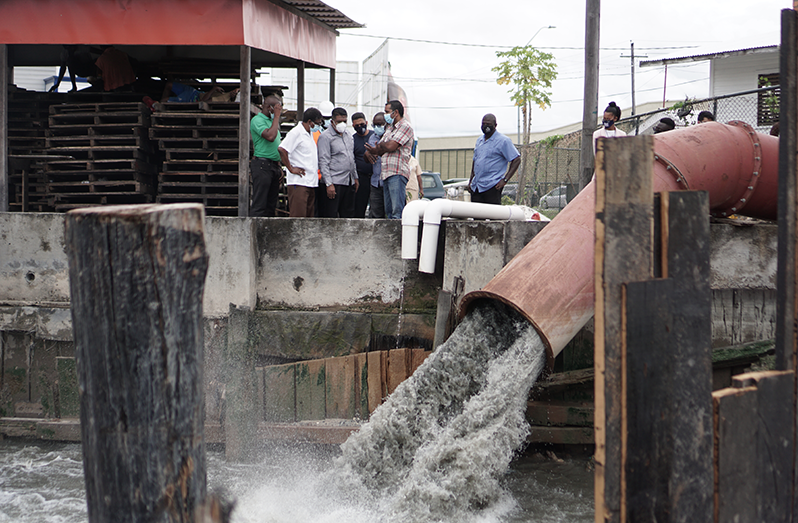 FLOODING in Georgetown City is unlikely, as Agriculture Minister Zulfikar Mustapha has said that pumps are operational and would be able to drain the land in the event of any incidents. Already, the city has begun to experience torrential rainfall, which, according to the National Weather Watch Center, is expected to last until April 11, 2021.
In light of heavy showers, Minister Mustapha visited South Ruimveldt and Sussex Street, where two drainage pumps were recently installed.
A team from the National Drainage and Irrigation Authority (NDIA) accompanied the minister including Chairman Lionel Wordsworth and Chief Executive Officer (CEO) Fredrick Flatts to inspect and check the pumps fully functional.
The pumps at Ruimveldt and Sussex Street are two of the heavy duty and fixed-duty pumps acquired under India’s US $ 4 million credit financing line, in 2020.
Mustapha said one of the pumps can drain about 35,520 gallons of water per minute, and will operate on a 24-hour basis, if necessary, to avoid any type of flooding in the city.

“I have just spoken to the city engineer and he assured me that he has all the employees in place to manage these structures and pumps so that they will be operational in a timely manner and if we have to operate the pump and ‘ the sluice gates at 24 – your basis is what will happen, ”said the minister.
He further said: “We also have three of our senior NDIA engineers who will staff these areas and monitor these structures and pumps on a 24-hour basis and who will report to us.” Mustapha noted that he, along with the NDIA team, will be traveling to different parts of the country to carry out similar exercises, to ensure that drainage facilitations throughout the country are in the right shape. Particular emphasis has been placed on rice growing areas since the harvest season began and farmers will be looking for ways to transport their crops from the field.

According to Minister Mustapha, resources were spent on developing dams for farmers to navigate; however, due to inclement weather, they will inevitably be affected.
He, therefore, pleads with farmers that while the ministry will continue to maintain the dams, they must use the infrastructure responsibly to allow all farmers to benefit. Minister Mustapha said Guyana has seen a huge expansion in its rice markets recently, with Hungary and Latvia being added to the list of rice markets, and the export quota to Brazil being increased to 34,000 tonnes by 10,000 tonnes.
“At the same time, we will see more production of this crop, so for the most part I try to put things in place, monitor the situation and get things in place so that we can avoid any losses to farmers and the at the same time avoid flooding in residential areas, ”he said.