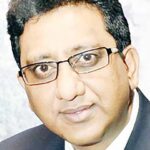 – says that RE’s withdrawal request has no merit

Kaieteur News – Yesterday Chief Justice (ag) Roxane George-Wiltshire revoked the deportation order issued by Chief Magistrate Sherdel Isaacs-Marcus last month to deport a group of Haitian nationals.
The Chief Justice also rejected the request made by the Attorney General (AG), Anil Nandlall, to withdraw the matter, stating that it has no merit.
Haitians were detained by the Government. On December 1, 2020, Chief Magistrate Isaacs-Marcus ordered the 26 Haitians to be deported even though they were not officially charged or laid before the court.
In that regard, attorney-at-law Darren Wade filed an application in the High Court to have the deportation order overturned.

During the ruling yesterday afternoon, the interim Chief Justice ruled that there was a breach of natural justice in issuing the deportation order in reference to Sections 16 and 28 of the Immigration Act. She said that the Haitians should have been taken to court before granting such an order and she therefore revoked the deportation order.
The interim Chief Justice also ruled that the freedom of the Haitians was violated when the order was given. He referred to Article 139 – protection of the right to personal liberty and Article 148 – protection of freedom of movement.

He added that the other orders including the referral to the Caribbean Court of Justice (CCJ) and for compensation are not given, adding that since the Haitians were released from custody, he had made no cost order.
Before delivering that ruling, the interim Chief Justice denied the AG’s request to have the matter withdrawn.
Earlier this month, a Notice of Application (NOA) was filed in the High Court after damning allegations were raised against attorney-at-law, Wade, for filing an application for Allandres Archer. Archer said his name was used on the application on behalf of the 26 Haitians without his permission.
Archer had teamed up with the AG to remove the issue.
However, the interim Chief Justice said yesterday that the AG’s request was strange as he has never seen a request by the respondent [AG] an issue would be filing an application for the applicant [Archer].
The AG then sought to bring clarity by stating that his application was not made on behalf of the applicant but was a request made by the respondent to cancel the application.
The Acting Chief Justice said that she had read the application and listened to the recording with the applicant saying that he had signed a number of documents and that he had been tricked into signing those documents.
He added that the applicant had joined a previous hearing of the matter so he is not aware that the court is not proceeding. In that regard, the interim Chief Justice ruled that the AG’s application has no merit, because, if the applicant wanted, he could have withdrawn the matter on the grounds set out in the NOA.
He then added that the applicant should have contacted Wade’s attorney-in-law, to have the matter withdrawn. Wade then told the court that the applicant did not contact him and make any such request.
Kaieteur News had reported that the Haitians were detained during a police cordon and search exercises conducted in November 2020. The Haitians were discovered between Nov. 7 and Nov. 8, 2020, at a city hotel in a minibus. It was reported that they were heading to Linden-Mabura Road.
The Haitians were arrested and placed in protective custody at the Hugo Chávez Rehabilitation and Reintegration Center until their deportation. However, they were later released and disappeared with no trace.