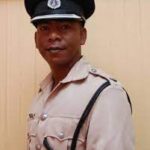 CJ sets a date to manage the Force promotion case

The case that braked the year-end promotions for senior officers was initially filed by Senior Superintendent of Police Calvin Brutus, who moved to the High Court to block promotions for senior members of the Guyana Police Force (GPF) until the decision . not promoting it is remembered. Brutus’s case was followed by a series of lawsuits filed in the High Court by senior police officers to block the promotions with some promising to take their case all the way to the Caribbean Court of Justice (CCJ).
In their challenge to the Police Service Commission (PSC), officials outlined, among other things, that the Commission’s practice not to promote police officers with pending disciplinary complaints, regardless of the nature or seriousness of such complaints, committing perpetual injustice against him. those scheduled for promotions.
They seek several statements from the Court, including a statement that the PSC’s policy not to promote, or consider for promotion, is consistent with pending disciplinary matters before it is unlawful; a statement that police officers are entitled to promotion; and a certiorari certification order, revocation and / or cancellation of the PSC’s decision denying those appointments.
Meanwhile, in his Fixed Date Request (FDA), Brutus outlined what he calls unreasonable and illegal practice of the PSC as they consider its annual end-of-year promotions.
Brutus had asked the Court to issue several orders, including an order to remove certiorari, revoke and / or cancel the PSC’s decision to promote Edmond Cooper, Philip Azore and Kurleigh Simon, Senior Superintendents of Police to the office of Assistant Police Commissioner. ; an order by Mandamus forcing the Commission to reconsider its decision not to promote it in accordance with the law and in accordance with its legitimate expectation; a statement that he is entitled to be heard in accordance with the principles of natural justice before the decision made by the Commission denying his promotion to the post of Assistant Police Commissioner; a statement that he is entitled to be heard in person on any reconsideration of the matter; a statement that the Commission has violated its fundamental right to equality and equal protection of the law guaranteed by Article 149 D of the Guyana Constitution; a statement that the Commission’s policy not to promote or consider for promotion ranks with disciplinary matters is unreasonable and unlawful; and a consequential order in accordance with Article 153 of the Constitution directing the Commission to be appointed to the post of Assistant Commissioner of Police.
In the early stages of the process, there were negotiations for a settlement between the Attorney General and PSC, but those negotiations were ultimately fruitless.