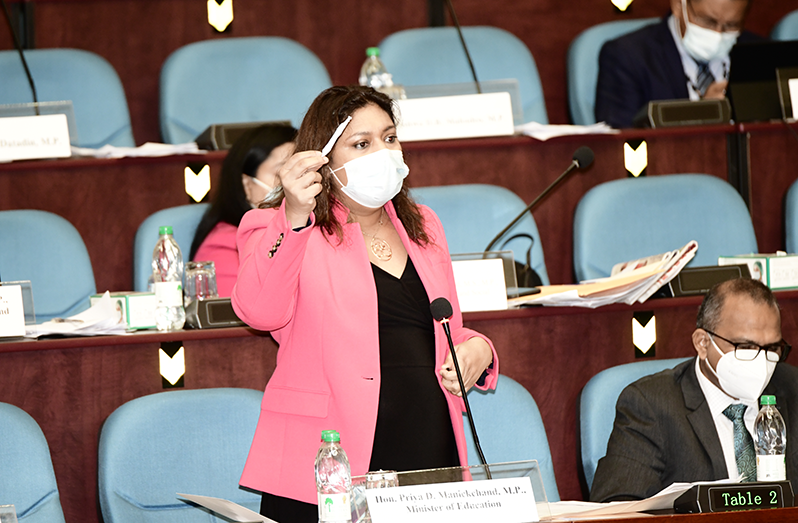 A LACK of scientific evidence and “deep thinking” was cited by Parliamentarians on the Government side of the House, as reasons for dismissing an opposition-sponsored bill, which sought to amend the Narcotic Drugs and Psychotropic Substances (Control) Act, so that get rid of jail time for people found with 500 grams or less of marijuana.
Arguing that the bill introduced by Opposition Senator Sherod Duncan was merely an attempt to be “ultra-liberal”, Attorney General and Minister for Legal Affairs Anil Nandlall SC said: “Madness is 500 grams. ” With the support of his colleagues on the Government side of the House, Nandlall challenged the rationale behind the Opposition’s proposal for such an amendment, akin to “reckless politics”. Decriminalization of cannabis, also known as marijuana or ganja, has been a worldwide discussion, but few countries have implemented policies to this effect, as the benefits and drawbacks need to be carefully thought through and considered. The reason is, it is a psychoactive drug that, in many cases, is used for the purpose of creation.

There are undoubtedly sections of society that use this marijuana for religious purposes and its medicinal properties, but the adverse effects, especially in the youth population, cannot be ruled out during decriminalization considerations. Duncan, the bill’s drafter, argued that the opposition relied heavily on a report from the Caribbean Community’s regional commission (CARICOM) on marijuana, which included data from Guyana and other Caribbean nations. The Government also argued that, through Nandlall, they used CARICOM guidelines for drawing up their own bill, which was presented to the House and passed to a special select committee. But, this, the Government argued, does not justify the grounds for allowing people to legally possess 500 grams of marijuana. The Attorney General argued that the opposition did not quote a study or statistics that show that this amount of marijuana is justified. “Not one study was quoted, and no statistic provided,” Nandlall argued, noting the proposal was insane.

The argument that there was no scientific evidence to support the opposition’s motion was also used by the ambitious Minister for Culture, Youth and Sport, Charles Ramson.

“You can’t experiment with people’s lives,” said Ramson, noting that it is a “waste of time” to introduce a bill that moves cannabis possession by over one pound.
She claims that there is no scientific basis to prove that possession of decriminalization of up to 500 grams is safe for a country. Initially, the opposition, while in Government, had put forward a proposal to allow possession of up to 15 grams, so the ‘astronomical’ rise, as Ramson said, is unsustainable. Referring to a study done on the impact of decriminalization of marijuana and alcohol in Jamaica, Minister Ramson argued that decriminalization correlates with first-time and overall use among the youth population.
“Worryingly, decriminalization correlates with the likelihood of first-time recidivism and general use for young people… there is also some evidence that it leads to

It is for this reason that Ramson said this is not the time to play games and experiment on Guyanese lives, especially young people.
Opposition Senator Jermaine Figueira argued, however, that the time was right for Guyana to move in the direction outlined by the Coalition. He believes this is necessary because Guyana is “behind the time”. The senator, however, referred to only one country where custodial sentencing for marijuana has been removed, Jamaica.
Responding to Figueira’s argument, Ramson questioned: “How can we be behind a time when there is only one Caribbean country?”

ILLOGICAL
He even considered the senator’s argument as ‘illogical,’ noting yet that there is no scientific evidence to support the opposition’s proposal, and that the people should not be used as test subjects. Nandlall was also critical of the opposition’s proposals, noting that the Government should deal with topics of major public concern.
His firm view is that legislation to remove custodial sentences for possession of marijuana is an issue that cannot be dealt with through a private members’ bill.
Not to mention the medium of presentation to the House, the Attorney General said that the drafter of the bill does not understand the difference between decriminalization and legislation. One example cited by Nandlall is the use of the term ‘narcotics,’ which, if passed, would have allowed for the decriminalization of over 100 types of narcotics listed in the act.

In addition, the Attorney General criticized the Opposition for its failure to address, but not limited to, the possession of marijuana in schools, public places, buildings, roads and highways.
The Attorney General was adamant that the opposition bill has fundamental, serious flaws, which the Government is, in any way, proposing to duplicate in its bill.
Its main policy objective is the bill drafted by the Government, which is to reduce recidivism, prison overcrowding and the burden on the criminal justice system. It also provides for saving the State’s money, and ultimately rebuilding the lives, families and communities affected by fining and imprisoning people, especially young people, for possession and use of small quantities of cannabis.

The bill achieves its policy objective by removing the prison sentence and monetary penalty for possession of cannabis of no more than 30 grams and replaces those penalties with mandatory counseling and community service, with counseling done after the person has been assessed by the certified counselor.
It also considers the detrimental impact of imprisonment on offenders and their families and balances it against the potential social effects of cannabis use and the concerns of members of the population including the religious community. The draft also considered the legislative reforms in other CARICOM countries.
While the Government bill has broad objectives, the Attorney General said it will be discussed further at a special select committee level.
The need for consensus on this legislation was also voiced by Education Minister Priya Manickchand who, using ‘co-movement’, said that 500 grams was too much, but a fair amount would come after consultation with key stakeholders.