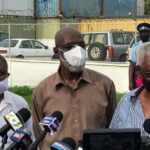 Kaieteur News – Three Guyana Elections Commission (GECOM) Commissioners, Vincent Alexander, Charles Corbin and Desmond Trotman, yesterday withdrew from a statutory meeting after they alleged that GECOM Chairman Claudette Singh had refused to meet a delegation of the National People’s Congress (PNC) ), as well as the party’s Secretary General (GS), Amna Ally.
According to commissioners nominated by the Coalition, it was reported yesterday at a meeting, that there was an exchange of correspondence between the Chairman of GECOM and Ally, with a request from Ally for meetings between the Commission and the Chair, respectively.
The Commissioners went on to say, however, that it was reported that the Chair had refused the request for a meeting with Ally on the basis that such a meeting was “unprecedented.” To this, the Commissioners wrote, “The APNU + AFC is a major stakeholder and as such we consider it discourteous, at least, for it not to entertain their presence.”
However, when Kaieteur News spoke to the government-nominated Commissioner, Sase Gunraj, he rejected the Commissioners’ statements and labeled them as “outright lies.”
“The request to the Chairman, based on what was communicated to us at today’s meeting, was that they had asked to meet the Chairman only. As far as I can remember, that is unprecedented where the Chairman alone in my tenure has entertained any meeting with any delegation from any political party. The Commission has always met the delegation. And for me, the Chairman’s position was in line with that which has always been the case, ”explained Gunraj.
When asked if the Chair had specifically communicated that she had rejected the conference because they had wanted to meet her alone, Gunraj explained “The Chair communicated to the Commission that she communicated with them – the delegate, Amna Ally – not ready to meet on your own, [but] that she is ready to meet, with the Commission. She is part of a joint group, and as a result, asked the meeting to be with the whole commission. They have clearly rejected that and the PNC Commissioners have walked out. ”
Despite this, it was highlighted that GECOM was about to make major voter registration decisions, a litigation issue that needs serious and detailed consideration, before making a decision.