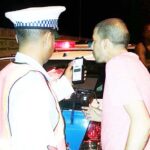 Kaieteur News – Six drunken drivers were apprehended on Saturday, in an unexpected road operation carried out along Demerara West Coast and West Bank (WCD, WBD) by a team of Division Three police ranks.

Traffic site holding respirator on driver back in 2016.

According to a statement from Section Three, the unanticipated operation led by a sergeant began around 19: 00HRS and ended at midnight.
The team of officers set up strategic road blocks on Region Three roads and began random testing of driver breathing.
Kaieteur News was told that drivers did not expect such a move from the police and six of them were caught off guard.
The ranks reported that all six drivers failed the breath tests after it was shown that their alcohol levels exceeded the legally prescribed limit. They were immediately arrested and placed on station bail and are expected to appear in court soon.
District Three police, under the command of Superintendent Errol Watts, have recently embarked on an ongoing campaign aimed at reducing crime and accident levels in the area.
One such operation involved an illegal party being bused in Den Amstel on December 6. Cops had received a noise nuisance complaint from area residents and Watts himself was accompanied by other ranks at the scene. They observed for a few minutes an illegal party in Back Street, Den Amstel attended by some 350 customers.
He called for backup and patrol ranks to arrive but upon seeing the officers, the outlaws at the party dispersed and began to run away from them. Some tires broke a police vehicle while escaping.
Police arrested and charged the suspected party host and two illegal parties.