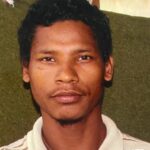 Kaieteur News – In their efforts to capture a refugee wanted for murdering a lost man, Answar Stoll, the ranks of Guyana Police yesterday raised the wrong person.
Kaieteur News was told by well-placed sources that police arrested a man at about 12: 15 hours in Haruni, Soesdyke. The individual was seen in a vehicle and resembled the man wanted Leon Waddle, who detectives believe he murdered Stoll at his home in Kuru Kuru between November 15 and 16 last year.
He was immediately taken into custody along with the driver of the vehicle and another passenger suspected of harboring him. Moments later he carried the man’s ranks to Georgetown but when he arrived, detectives working on the case told them he was the wrong person.

Lost man believed to have been murdered: Answar Stoll

The man was later released and police assured him he will continue his manhunt to apprehend the right suspect, Waddle. No stoll has been seen or heard since Nov. 15, 2020. Concerned family members showed up at his home in December with ranks and found blood stains on the wall. His house was also robbed. His documents and other personal belongings were missing but his keys were found.
An investigation was launched and police revealed that detectives had collected enough information for them to suspect he was murdered. Waddle was linked to the crime by another individual who had been questioned by detectives in the early stages of the investigation.
Sources also told this newspaper that one theory is that Stoll was killed during a altercation during a drinking session held at his premises. Family members later revealed that Waddle had been living with Stoll for some time now. They said the suspect was always abusive towards Stoll and would threaten to kill him. A sibling had revealed that Stoll had decided to put out the suspect who sparked tensions between the two.
They suspect that this may have been the reason he was killed. Anyone with information that may lead to the arrest of Leon Waddle, the suspect in the murder of Answar Stoll, is asked to contact police at phone numbers: 216-0250, 216-0251 216-0252, 216-0253, 216- 0254, 265-7383, 261-2760, 225-3650, 226-1928, 911 or the nearest police station.