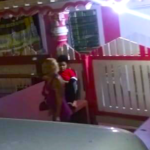 The house where the ‘private party’ was held.

The banner advertising the event.

Kaieteur News – Seven COVID-19 law breakers, who had attended a private party in Stanleytown, West Bank Demerara (WBD) on Sunday, were forced to crawl out of bushes they were hiding in after police decided to pull their vehicles away. District Three police reported that five of the violators were drivers of the vehicles while the other two were passengers.
Those individuals, along with the private party receptionist, were arrested and taken into custody at La Grange Police Station for violating the COVID-19 restrictions.
According to police, Division Three ranks had received quite a tip that the party was being held at Lot 60, Church Street, Stanleytown, WBD.
The banner of the private event advert specified that it was an “annual bus for the control of fried fish (lime) and lime” run by Stanleytown African Culture Group, La Retraite. The event was slated to start at 2pm (14:00 hours) on Sunday April 11, 2021.
Patrol ranks reportedly collapsed at the scene later that night while the party was apparently in full swing. The “Five Star General”, as advertised, was playing music at the time.
Sponsors were said to be “swinging to the vibes” in the lower flat of Lot 60’s mansion but when they saw the ranks approaching they began to disperse.
Those ranks reported that attendees had started running a “helter skelter”, some into the upper apartment of the house, to escape. Attempts were made to capture the scourge attendees but the ranks only managed to capture the Receptionist.
After the attendees disappeared, ranks suspected that some of them may have abandoned their vehicles, which were parked in front of the house.
As a result, a tow truck was summoned to move the vehicles. At the same time, the ranks began to part with the “Five Star General” music system.
This announcement was made aware that while the vehicles were being taken away to La Grange Police Station and Wales respectively, seven individuals emerged from the nearby bushes to claim ownership. The ranks wasted no time in arresting them.