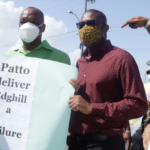 Leader of the Opposition, Joseph Harmon (left), and former Minister for Public Infrastructure, David Patterson, were out of court yesterday.

Some of the protesters standing outside the court.

Kaieteur News – Yesterday former Public Infrastructure Minister David Patterson and former Demerara Harbor Bridge Corporation (DHBC) General Manager Rawlston Adams were charged with defrauding the DHBC of over $ 160M.
Patterson and Adams made their first appearance at Georgetown Magistrates’ Court yesterday. The matter was first sent to the Chief Magistrate, Ann McLennan, but she abstained from the matter as Patterson and Adams were known to her.
The matter was then passed to the Senior Magistrate, Leron Daly, who read the joint charge to the defendants. Patterson is represented by attorneys-in-law, Ronald Burch-Smith and Nigel Hughes, while Adams is represented by attorney-in-law, Glenn Hanoman.
The duo is charged with defrauding the DHBC in connection with a contract awarded to a Dutch company, LievenseCSO, to carry out a feasibility study and design for a new Demerara Harbor Bridge between Houston, East Bank Demerara, and Versailles, Demerara Lan West.
Patterson and Adams were not required to plead to the joint charge, which claimed that before November 18, 2016 and February 1, 2018 in Georgetown, they had conspired together and with other unidentified persons, to defraud ‘ r DHBC of $ 162,635,015, DHBC funds, Asphalt Plant Account.

The charge came from the Special Organized Crime Unit (SOCU), a branch of the Guyana Police Force (GPF). There is an ongoing search by SOCU in relation to Patterson’s role in sourcing the Dutch company selected to carry out the feasibility study.
Following the announcement of the contract in 2017, the then Progressive Opposition / Civic Party (PPP / C) had called for a thorough investigation by the Public Procurement Commission (PPC) to award the company the contract the Netherlands, which later triggered an investigation by SOCU.
The PPC found in its investigation that Patterson’s application to Cabinet for approval of the contract had not been forwarded through the National Tender Procurement and Administration Board (NPTAB). As a result, the PPC had requested that the tender be reinstated. NPTAB had approved the retendering of the project, but it had not.
The PPP / C was adamant that evading the procurement was unlawful, but SOCU later stated that it had sought legal advice, and that there is no evidence that a crime had been committed.
SOCU recently reopened the case and last Friday, Patterson and Adams were called in for questioning by SOCU and the charge was later established.
Senior Magistrate Daly granted $ 200,000 bail to both defendants and the matter was adjourned until February 15, 2021.
Meanwhile, outside the court compound, Opposition Leader Joseph Harmon, and other opposition members were seen holding placards in support of Patterson.
Some of the statements on the placards were, “Patto delivers, Edghill is a failure,” “Enough is enough” and “CPD protects PPP,” which they repeatedly chanted.
After concluding the matter, Adams and his lawyer, Hanoman, declined to comment while Hughes told reporters he believed the allegations were political in nature rather than “legal jurisprudence.”
Hughes said, “the background to this allegation is that the Government of Guyana was approached by a foreign government, specifically an agency of the Ministry headed by Mr Patterson, expressing their interest in providing services to the Government of Guyana on the feasibility of the Demerara Bridge. ”Hughes added that the action was not initiated by his client so there should be no consequences.
The lawyer also said, “we believe that this accusation is not only unfounded but also wicked.” He also said that it should be noted that the same feasibility study is the one being used by the PPP / C government, which is still progressing with the plans to build a new Demerara Bridge.