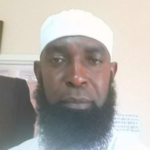 Imam Na’eem with members of his family.

Kaieteur News – Many people, especially the young people of Albouystown are familiar with the work of Imam Na’eem Muhammad, the Islamic priest who has been instrumental in helping improve their relationship with the police.
In 2014, Imam Na’eem helped successfully lead the Albouystown Impact (IAP) project, which was intended to make the neighborhood safer through law enforcement and social intervention, a collaborative practice between Guyana Police (GPF) and the religious and social institutions of Albouystown. In fact, this week’s ‘Special Person’ has over 24 years of experience in leadership positions spanning agriculture, social work and business management.

Kaieteur News recently caught up with the highly respected religious figure known for his ability to make a positive impact on his community; he shared honestly about his Islamic efforts, social work and community development.
During the interview, the dedicated Islamic leader and community advocate attributed his academic and other achievements to faith, family and upbringing.
He noted that his drive for development had allowed him to work in leadership positions in several different agencies including Guyana Rice and Milling Authority, Guyana Sugar Corporation (GuySuCo) Berbice Islamic School in Port Mourant, Corentyne, National Agricultural Research and Extension Institute (NAREI) o under the Ministry of Agriculture (MoA) where he is currently employed as Training Manager.

Imam Na’eem presents a certificate to a young member of his Islamic classes.

EARLY STEWARDSHIP
Born Warren Atoesho Barlow to his parents, Archibald Barlow and Loreen Barlow nee Collins, this week’s ‘Special Person’ spent most of his formative years in ancient Berbice county.
The Imam noted that he had a wonderful childhood enjoying swimming in trenches, playing traditional folk games and other things in relation to life in rural communities.
Led by his great aunt, popularly known in the village of Alness on the Corentyne Coast as ‘Aunty Lucille Park’, the Imam explained that he was nurtured into a goal-oriented, goal-oriented individual , and his sole purpose for living was to ensure that those around him were cared for.
Along with him, Imam Na’eem told Kaieteur News that his aunt had also raised two of his Compton Matheson nephews, Herbert Park, his only son, Nigel Park, and one of his nieces, Loretta Matheson. He said “this is due to the fact that my parents have eight other children besides me.”
With the family growing and his father working as an educator to look after them, his mother had no other choice but to allow him to be raised by Aunt Lucille as she had the task of raising five young children on the at one time.

Imam Na’eem with members of the social work practice at a planning event.

But under that care, the young man had nothing special in the field of education.
He attended Alness Village Nurseries and Primary Schools where he wrote the Common Entrance Examination in the year 1981 and successfully located at Winifred Gaskin Memorial High School.
Under the stewardship of Ms Norma Stewart, a teenage Barlow at the time had a positive impact on the importance of mentoring and pursuing higher goals.
He remembered vividly that, during normal Monday services, he would not conclude without this short poem recited by all: “the heights reached by big men were not reached and kept by a sudden flight, but they, while their companions were asleep, were on. roofing all night ”.
After completing secondary education, Barlow was called by the Department of Education in New Amsterdam Berbice in the year 1987 to become a teacher.
“I was sent to Rose Hall Primary School where I taught there for a period of a year,” he said, noting that this may be due to the fact that his father was the former Education Officer, and the Head of the teachers there – a service training center in New Amsterdam.
Sharing a little about his parents, Imam Na’eem explained that his father was an exemplary discipline and strict educator that he was so dedicated to his work that he recently retired as a teacher with the Board of Education in New York.
He recalled that his mother was a compassionate home-maker who always made sure she put an extra pint of rice in the pot, so that neighbors could have something to eat, should they drop by us.
Although his mother is now deceased and his father living abroad, Imam Na’eem credits them for his dedication to improving himself and his community, his leadership impetus and his compassionate disposition.

That commitment to self-improvement continued after High School, the Imam attended Kuru Kuru Cooperative College in Kuru Kuru on Soesdyke Highway and pursued a Diploma in Management, joined Guyana Rice Authority and Milling in Johanna at Black Busk Polder where he was appointed As Clerk of Accounts, he was later promoted to acting head of Payroll.
After a year, the industry was diverted; Alesie Group of Companies purchased the facility. I applied to Guyana Sugar Corporation for a field foreman position. She didn’t get the job right away but was put on the waiting list.
Not one to shy away from challenges, the Imam recalled having chosen to work in the fields to plant a sugar cane during the processing of his application to make sure his family was catered for.
He explained that he had received Islam during high school and had completed an Imam Course at the Central Islamic Institute of Guyana at Woolford Avenue. His faith taught him some valuable lessons in responsibility and serving others.
“Undoubtedly,” he said, “being in service to the people has always been very high on my agenda because of the merits of such an effort.
“We have been taught that those who serve others in this world, Allah will serve them in paradise. Understanding my responsibility, along with being an Imam has allowed me to show the love and care that our Prophet showed to humanity, ”he added.
Still in an attempt to further his studies to improve himself and those associated with him, the Imam recalled that during those years he took the opportunity to apply to study at the Guyana School of Agriculture (GSA) to pursue a Diploma in Agriculture.
Imam Na’eem remembered that he emigrated to St. Lucia, then to the United States where I stayed with his father for a few years after graduating in 1995.
“I attended Hunters College under the City University of New York where I did pre-calculus and Economics,” he said and further revealed that he was unable to continue due to the high cost of my course.
On his return to Guyana in 2004, Imam Na’eem was asked to play a key role in starting the Berbice Islamic School in Port Mourant on the Corentyne Coast.
After a week of acting, he was appointed Head of the Institute.
“I managed that facility for eight long years and saw it transformed into a very successful primary and secondary school,” said the Imam adding that he completed his Degree in Agriculture at the University of Guyana (AS) Berbice Campus during the period that.

THE IMPACT OF ALBOUYSTOWN
The Islamic priest resigned from his post in 2012, and moved to Georgetown where he was appointed Imam and Director of the AnNajm Masjid Social Center in Albouystown. The Imam said his perspective of the community had led him to cultivate fruitful relationships with his members, especially the young people.
He stated “I had never seen the community of Albouystown as depressed, or the people of the community as thieves or criminals as others consider them, I saw them as my brothers and sisters despite their shortcomings and challenges.”
As a result, the Imam successfully implemented a monthly youth program where a senior officer visited and spoke to community members at the AnNajm Masjid and Social Center on many social topics including domestic violence, the value and importance of education, among others. That program, Impact Albouystown, helped bridge the gap between police and community members who viewed police as an enemy instead of an ally.
During this time, Imam Na’eem ran a monthly family night program where families would be given a lecture by a prominent personality and dinner.
While there, he organized two major inter-jamaat goalkeeping soccer competitions – judo and table tennis training at the Masjid.
He explained that Community big screen TV programs are held on Albouystown tarmac and that there are hamper classes, beef distribution during qurbani, charity distribution, among others.
“We were also the pioneers of the Impact Albouystown project together with Guyana Police where citizens were under police protection during the day, and evening patrols. There were also quran, apportionments, publications classes on Islam, training sessions and seminars with governmental and non-governmental agencies, ”added Imam Na’eem.
Although acknowledged and awarded by Guyana Police for outstanding contribution to the police / community efforts of the Albouystown community, Imam Na’eem said that nothing keeps him motivated or his deep love for humanity.
“I think my biggest achievement to date would be to see many young people in the Albouystown community who took a positive outlook on life. Many would have interacted with the teachings and principles of Islam that would have affected positive behavior changes to their lives. There are many today who speak out against vices in the community and have taken life seriously in terms of their faith and livelihood, ”he said.
Given his commitment to the social enterprises, Imam Na’eem admits that sometimes he would find it challenging to balance his time between work and family.
He said, “The demands from family, work business and studies have always been challenging. I can manage because of my skills in administration and time management. “
On advice for living, the Imam says it is never short.
“Poverty,” he said, “is a state where a person or community does not have the resources necessary to achieve at least a standard of living.”
He wants the younger generation to know that they should always strive for what is permanence and not pursue what is temporary.
“I would advise the young people in Albouystown that education prepares them for life and therefore does not waste opportunities for education. As a result, they need to strive to equip themselves with the necessary tools that will allow them to become employable so that they can earn to care for their families, ”said the Imam.
He advises many young people to, “Be wary of trying to emulate the lifestyles of people who may have made a fortune from illegal activities. Let’s always be positive and strive to live an unhurried lifestyle that will earn them the respect they have in their communities and further afield. ”