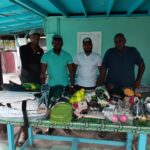 Kaieteur News – Former Berbice, Guyana, West Indies ‘B’ and US cricketer Derick Kallicharran not only gives back to the Berbice Cricket Board (BCB) but also Tain Cricket Club in Port Mourant Berbice.
The idea of ​​the need for cricket gears came from the team that plays at the second division level.
Two years ago, the Club approached Kallicharran, brother of former West Indies Captain Alvin Kallicharran, who is based in the Village where he grew up and has now fulfilled that request.
The 62-year-old Kallicharran, uncle of the Nagamootoo brothers; Mahendra and Vishaul, who now live in the USA, said he wanted to give back to his Village club and was impressed with how cricket is run in his home County.

Kallicharran, who played 39 First Class matches and took 98 wickets with his leg spin, toured Zimbabwe in 1983 with the West Indies ‘B’ team.
Kallicharran, who played for the USA in the 1994 ICC Trophy, said he hoped the gears would be used with care and help to make the players more comfortable.
Tain Cricket Executive Adrian Downer, who introduced the gears to several players, said the club will benefit hugely from the gears as they take part in Berbice cricket.
BCB led by Hilbert Foster is easily the most vibrant Cricket Board in Guyana, while Berbice has the biggest cricket tournaments in Guyana.
Several prominent Berbice cricketers and even those who have never played for Berbice such as former Guyana and West Indies Captain Ramnaresh Sarwan have supported Berbice cricket in the recent past. (Sean Devers)