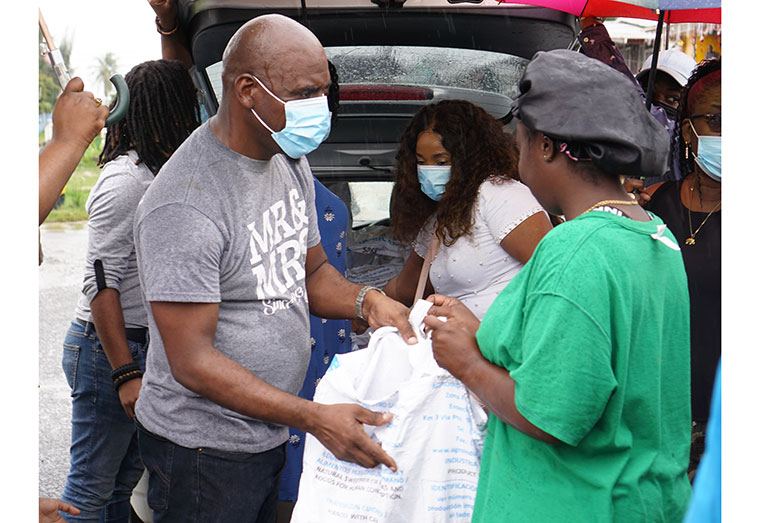 More than 50 people from around Albouystown in Georgetown received food hampers from the Destiny Empowerment Worship Center, on Sunday, when the church continued its annual campaign to give back to vulnerable communities.

Beneficiaries were provided with food bags containing a number of essential food items, and were grateful to the church for reaching out, especially given the hardship faced this year by many people due to the COVID-19 situation.

“This year it was rough, rough because the work was so hard. So we are grateful for every little bit, ”said one 50-year-old receptionist working as a domestic worker; she is also the mother of three children.

A team of members of the church rained at noon to carry out the activity, which took place on James Street. Church pastor Sean Sobers and his wife, Michelle, led the exercise and marked the church’s annual “21 Prayer Days” gathering that began December 1, 2020.
“One of the features of being a Christian is giving, Christ gave so we must give. During this season, we believe this is the best time to give back, so each year we usually do our 21-day prayer and then take the time to give. We give clothes, we give food, in whatever way we can, so this year is no different, ”shared Sobers, who is also a well-known local singer.

Sobers said giving back is an important part of reaching out to the mass and ending their prayer campaign on a strong note. Sobers has been head of Durban Street church since its inception ten years ago. The church started giving it back as part of its Christmas campaign some five years ago.
“Most people, they usually pray at the beginning of the year, but five years ago God told us, he not only wants to start the year strong, but to end the year strong. And so we started this and say if you do anything 21 times, it becomes a habit, so it’s not just about praying, it’s about re-dedicating your life to God; so when you come to the end of the year you finish strong and then you start getting stronger, ”said Sobers.

This year, the church was moved even more to give back as many people came aboard the ship to make the activity possible.
“There are many people in the diaspora who have been blessed to make this happen, and we are truly grateful for their contributions,” Sobers expressed.
He further said: “Since this whole COVID-19, we put our service online and the online membership really helped us grow. We had people from as far afield as Africa, the US, Canada, London, the Netherlands and elsewhere. So a lot of those people have partnered with us, so it’s not even the end there is much more to come in 2021. ”

Church Administrator Nessa Sobers explained that the church would often visit various communities but was touched this year to reach out to Albouystown.
“For the past five years we have been doing what we call deep outreach where we empower people by reaching out to communities and giving back to the less fortunate and vulnerable in different ways. We don’t always come to Albouystown. We have targeted other places in Georgetown and even out of Georgetown, but we decided to come to this community this year. We were here last year and wanted to come out to support again this year, ”she shared.