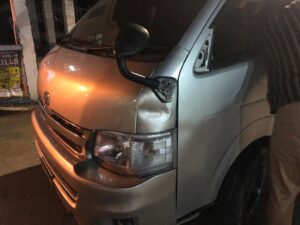 Kaieteur News – A Diamond man is now dead after being hit Friday by an injection owned by the Ministry of Housing and Water.
The pedestrian has been identified as Vijai Doodnauth, 27, of Sea Dam, Diamond Squatting Area, Demerara East Bank.
Apparently, the man was struck by the ministry vehicle just around 18:45 o’clock.
According to police, the driver of the pickup who lives at Georgetown’s Lodge Lodge Resort, alleged that Doodnauth ran into the path of his vehicle.
He told investigators he was heading north toward Georgetown along Diamond Public Road on the westbound carriageway. The driver said that while he was in the vicinity of Courts, Doodnauth who was apparently standing on the concrete median in the middle of the road suddenly ran across.
He is alleged to have mastered brakes but could not avoid confrontation with the man.
The Doodnauth effect flowed some distance away and fell onto the paved road. He was seriously injured and lay there dumb. The driver picked him up and rushed him to Georgetown Public Hospital Corporation (GPHC).
Doodnauth was still alive but unconscious, and doctors there admitted him in the Intensive Care Unit (ICU). Hours later at 02:22 am, police reported, Doodnauth succumbed to his injuries.
The ministry driver was arrested and police tested him for alcohol but no trace was found in his system.
This is the second time in six days that a pedestrian has been struck down by a vehicle belonging to one of the ministries.
Kaieteur news reported last Wednesday that a drunk ministry driver was in custody after an accident with a salesman. That accident happened around 20:45 o’clock. on Monday, December 14, along Plantain Walk Public Road, Demerara West Bank (WBD).
The victim, Basil Persaud, 57, of Lot C Middle Street, Pouderoyen, was reported crossing the road when a Pitbull minibus struck him.
That bus belongs to the Ministry of Human Service and Social Security.
Persaud survived but suffered injuries. Police had tested the driver for alcohol and found it to be above the legal limit.
The driver has since reached out to Kaieteur News to identify his side of the story. He admitted that he had a little unpacking but denied he failed the breathing test. He even claimed that he did not knock the man down but instead ran to his mirror. He told Kaieteur News that he had taken the victim to hospital. He labeled the man as “junk” and claimed he was not seriously injured.