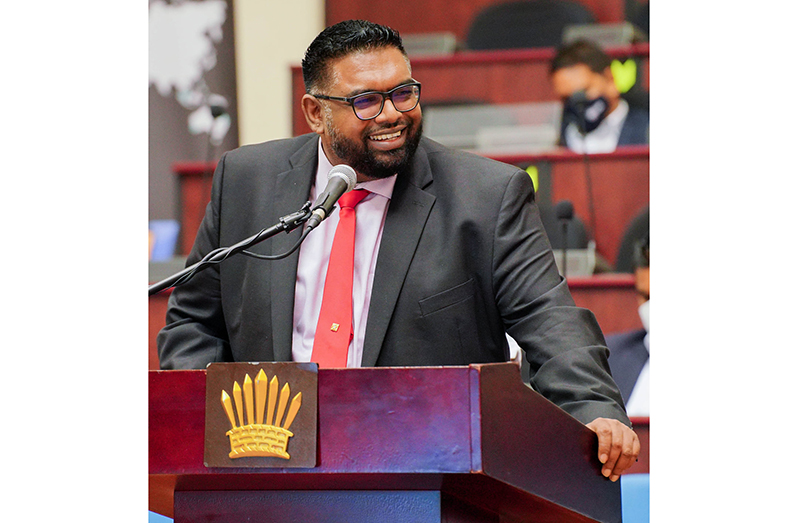 GUYANA is ripe for investment and Guyanese in the diaspora who are ready to return home or invest here will benefit from a favorable business environment and improved health, education and safety systems.
This is according to President, Dr. Irfaan Ali, in an interview with Farook Juman, on a radio program on WPAT 930 AM Radio, Manhattan, New York, on Friday.
The diaspora plays a key role in supporting families in Guyana.
Between 2006 and 2015, there was great interest and movement in Guyana along with investments from the diaspora. Today, says Dr. Ali, the environment is busier for investment with the oil and gas sector in the pipeline.

With the emerging oil and gas sector, the President said the government is working not only to strengthen the traditional sector, but to open up new areas and new opportunities.
“We see great potential for the diaspora to bring their capital resources back here. As a matter of fact, we are now discussing financial instruments through which we can get all categories and levels of the diaspora and integrate them into the development of our country, ”said the President.
He explained that the diaspora is familiar with a certain level of service, whether public or private, and in Guyana, these services, especially in the areas of health, safety and education, will be strengthened to the level of international standards.

When these things are done, the President said the decision to return to Guyana becomes easier as the diaspora raises these concerns.
“We also have part-time investors who invest their resources to and from, but when coming back permanently, safety issues, healthcare issues, education, sports services, government services are vital areas of interest to the diaspora and these are the areas where we target, invest to improve and improve and to ensure we create an enabling environment, ”said President Ali

However, he noted that bugbear has been focusing too much on the negative things without acknowledging the positives in Guyana. This difficulty, he noted, has created a negative perception of Guyana in the diaspora.
“The ‘what if’, oh, I’d come there but what if it was, or what if. I think we need to have a positive outlook, the opportunities are there, you can’t understand the opportunities from a third-hand or second-hand perspective, you have to come here, do your research and look at the areas where as the country moves towards them, look at the opportunities and plan your own path, ”said the Head of State, noting that the government can only create the enabling environment.

INFRASTRUCTURE
According to the President, there will be three tiers of infrastructure development, starting from the community level that begins with improving the health care systems, road network, educational and sports facilities.
These, he said, will be addressed in current and upcoming budgets.
Further, the President said that growth opportunities or hubs will be created within a cluster of communities that can generate employment.
The second tier stated that it will focus on regional development and key investment opportunities in the different regions.
And on that note, he pointed to Region Three as an example.

“You will see the development of agro-processing facilities; you will see increased use of the Essequibo River in terms of investment hubs and this will, of course, generate various growth surveys, and to facilitate this, we are not talking about a new Demerara Harbor Bridge that will only have a four lane road. going from the harbor bridge to Parika, but also the Welsh Development Agency and the landing of the onshore gas pipeline in Region Three, which will have a major industrial development linked to power generation, but we’re looking at the possibility of propane plant and LPG, ”said the President.
These developments in Region Three, said the President, will create a population drive to achieve urbanization and regionalization that will be supported by the housing program that will create jobs and stimulate the banking sector.

Further, he said another access road will be created from Timehri, Demerara East Bank connecting Region Three, then heading to Bartica. This is expected to significantly reduce travel cost and time.
In addition, Dr. Ali said there will also be a national energy plan aimed at reducing the cost of power by 50 percent by 2025.
At tier three, the President said that there will be a transformational infrastructure development and these would include working with Suriname to bridge the Corentyne River. This will create a brand new logistics hub, linked to private sector development and a deepwater harbor scheme.
In Region 10, the President said the bauxite industry and the mining sectors will have to be transformed into service sectors, where engineering, welding and other services will complement the industry.

He also noted that call centers will boost employment in the region.
Meanwhile, in Region Five, he said there will be a national aquaculture masterplan, and pointed out that “in every region there will be opportunities created and you must pursue those opportunities.”
The Government is also working to strengthen sugar to make it viable and sustainable.
From a conservative perspective, the President said there should be five new hotels within the next five years.
“We also support private healthcare and private education to make it globally competitive so that we can get foreign currency returns from these services, creating a focal point for health and educational services.”
Other developments planned include the construction of a new city, a new highway from Ogle, Demerara East Coast to Diamond, EBD to Timehri airport, which reduces travel time when connecting the new city.