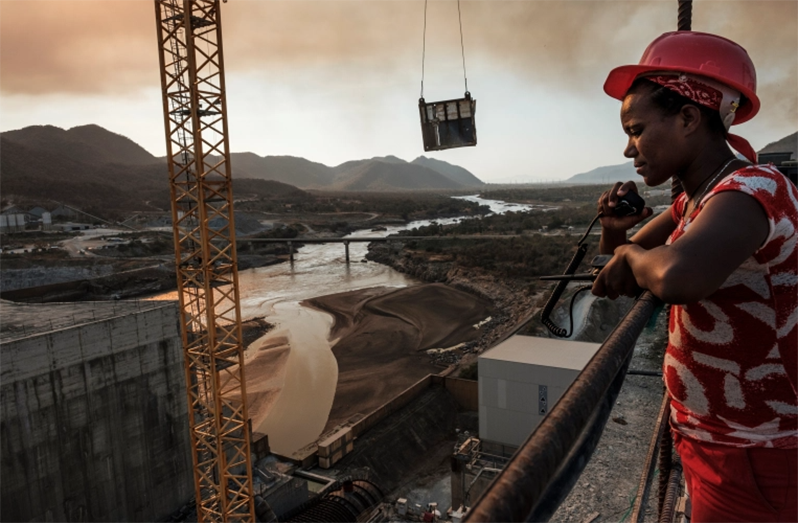 (AL JAZEERA): The latest round of talks between Egypt, Ethiopia and Sudan over the Ethiopian Grand Renaissance Dam (GERD) has ended without making any progress.
Delegations from the three countries met in a bid to break negotiations over Ethiopia’s massive dam on the Nile river, says the Addis Ababa project that is key to its economic development and power generation.
The talks, which took place in Kinshasa, DR Congo, ended Tuesday without reaching a deal, according to a communist released after they were over.
Egypt’s foreign ministry said negotiations had failed after Ethiopia rejected a proposal from Sudan to include international mediators in talks.
Speaker Ahmed Hafez said Ethiopia has ruled out the United States, the European Union, the United Nations and the African Union from playing a role in overseeing the negotiations.
“This position again reveals Ethiopia’s lack of political will to negotiate in good faith,” Egypt’s foreign ministry said in a statement.
Sudan’s foreign minister said Ethiopia’s unilateral moves over the dam are a clear violation of international law.
“Without a fresh approach to negotiations, Ethiopia will find a place to impose a fait accompli and put all the peoples of the region at serious risk,” Mariam al-Sadiq al-Mahdi told reporters.

Ethiopian officials did not immediately comment.
The GERD, whose planned capacity of 6,500 megawatts will make it the largest dam in Africa, has been under tension since its first stone was laid in April 2011.
Ethiopia says the dam project is key to its economic development and power generation for its population of 110 million people.
But Egypt fears that the dam will interfere with its Nile water supplies, while Sudan is concerned about the safety of the dam and water is flowing through its own dams and water stations.
Last week, Egyptian President Abdel Fattah el-Sisi said there would be “unthinkable instability in the region” if a dam affected Egypt’s water supplies.
Hiba Morgan’s major sticking point, Al Jazeera, reporting from Khartoum, said the objective of the negotiations was to draw up a roadmap for the negotiations to continue before Ethiopia fills the dam for the second time. “Sudan and Egypt on one side want the mediation to expand to include the United States, the United Nations, and the European Union – which currently holds the role of observers – rather than the intermediaries.” However, he continued, the big sticking point is that Ethiopia wants GERD talks to be led only by the African Union.
“Ethiopia also said that Egypt and Sudan had offered points that were not part of the agenda, such as delaying the completion of the GERD until a deal was reached,” he added.

Ethiopia announced that the second fill will take place in July and is expected to store 13.5 billion cubic meters of water.
“That’s three times more than the amount of water stored in the GERD in the first fill last year, which affected water stations and some farms along the River Nile and affected the water supplies of five million people in the country, ”said Morgan.
Allam Ahmed, founding president of the World Sustainable Development Association, told Al Jazeera that a country or bloc that has not been involved in past negotiations and is being considered independent – is likely to have to possibly the United States, Canada or China. play a mediating role to move the conversations forward.
“The conflict will continue to escalate and I believe there will be a need for higher level intervention,” he said.
He said that none of the parties is seriously considering destroying the dam, but that Ethiopian dam data needs to be scrutinized by independent technical experts to address the concerns. “The outstanding issues could be resolved quickly if we can have a transparent technical evaluation of the dam – that’s the key point.”