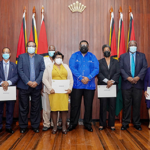 Eight commissioners swore in to have oversight of Local Govt. Organs

New LGC Board comes into force …

Kaieteur News – Eight people were sworn in by President Irfaan Ali yesterday to act on the Local Government Commission (LGC); the body responsible for overseeing all local government organs.
During the swearing-in ceremony, held at the President’s Office, three nominees from the People’s Progressive Party / Civic (PPP / C) were appointed by the President, three nominees of the A Partnership for National Unity + Alliance for Change (APNU + AFC ) Coalition sworn in, another commissioner appointed by President Ali, in consultation with the National Assembly, the other following the approval of the Minister for Local Government.
President Ali, respectively, administered the Oath of Office to PPP / C nominees: Clinton Collymore and Norman Whittaker – two former Local Government Ministers, as well as former Mayor and Georgetown City Clerk Carol Sooba.
President Ali also swore in three candidates nominated by the APNU + AFC Coalition, which included former District Four Chairman Clement Corlette, Ms Joan-Ann Romascindo and Nicola Denise Trotman.
The other two members of the Commission are: Trade Unionist Carvil Duncan, nominated by a Parliamentary Committee, and former Region Three Chairman Julius Faerber, nominated by the Minister for Local Government and Regional Development, Nigel Dharamlall. The new LGC Board will be in effect for three years.
In his remarks to the newly sworn commissioners, Ali said that while Guyana is on the verge of economic development and social transformation, local government bodies need to play a vital role in making the transition effective and efficient.
In this regard, the President noted that his Government appreciates the “important role” the LGC can play in ensuring that its policies and programs are not delayed by impediment, poor implementation, absence of professionalism or disputes of within local government bodies.
“The Government, therefore, endorses the need for and constitutes the Local Government Commission. As such, this simple ceremony borders on importance. It is a manifestation of the Government’s commitment to furthering the aims and objectives of local government authorities and in particular, to tackle the employment, transfer, discipline and dismissal of public officials within the local government system and to resolve disputes within and between entities local government. , “he said.
Ali stressed, “the Executive’s intention is to ensure that the future development of the country is balanced and, more importantly, safeguarded at all levels of our society – at the national, regional and community levels. ”
In this respect, President Ali stated that the LGC has the power to monitor and review the performance and implementation of all local government organ policies, investigate any matter under its judgment and propose remedial action to the Minister, monitor and review all existing and proposed legislation. , and / or policies and measures relating to local government organs.
The President said that as the country’s budget allocation expands, more responsibilities will be placed on Local Government bodies as there will be a greater need for better oversight, professionalism and accountability.
He also said that he knows some LGC members (both new and returning) personally and can attest to their commitment to Guyana’s development.
“I can assure you of the support of my administration and give you my personal guarantee that any attempt to interfere with the discharge of your functions specified under the Constitution and the Local Government Commission Act will not be tolerated,” Ali told the LGC panel.