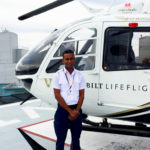 Datt and his colleagues have been exposed to some intensive training.

Kaieteur News – For most of his 12-year career in the health sector, Nandaram Datt has been involved in the rapid deployment of the Emergency Room (ER) at Georgetown Public Hospital Corporation (GPHC). But when he heard that there were plans to launch a national Emergency Medical Service (EMS) in 2016, he was keen to be part of that initiative.
“I was enthusiastic about being part of EMS since I realized that people would now be able to receive medical attention before arriving at the hospital,” Datt shared during a recent interview.

The 33-year-old Datt, who hails from Canal One, Demerara West Bank, Canal Nursery Number One, then Mc Gillivray Primary School before moving on to St Rose. His desire to be in the healthcare system was met after he completed a diploma in Nursing at Georgetown School of Nursing.
With the ER experience he gained thereafter, Datt was an easy choice when EMS Director, Dr. Zulfikar Bux, recruiting people to be trained as Emergency Medical Technicians (EMTs). This training was facilitated by a visiting team of paramedics and consultants at EMS from Vanderbilt Medical Center in Nashville, Tennessee, United States.
In June 2016, Datt was appointed Chief EMT and he does not regret choosing to investigate this aspect of healthcare. But he hasn’t been walking in the park for him.

He has had to juggle family life with his career, which he takes pride in.
Datt is the husband of the registered nurse, Rajshree Dat, and the father of eight-year-old Rahul and three-year-old Ranvier.
Although dedicated to his family, he insisted, “my passion lies in helping save as many lives as possible.”
Explaining what a typical working day looks like for him, Datt said, “Wow! It’s busy but I’m trying to ensure a smooth flow of EMS operations, ambulances are working properly and are stocked with supplies and adequately staffed. I attend meetings and go on ambulance calls to assist EMTs or communicate on the radio with them as it relates to patient care. “
Since COVID-19, he added, there has been ongoing training for staff to ensure they meet international standards in responding to COVID-19 patients.
He revealed that the EMS team consists of three administrative staff and 74 EMTs.
Datt, like his colleagues, understands too well the importance of such a service. Speaking about this recently, he passionately revealed, “EMS is remarkable and of huge benefit to members of the public. To date we have covered 15,798 people with medical trauma and gynecological issues over the past few years. We have rescued four people who went into cardiac arrest, 17 babies were born either at home or on the way to hospital, and countless people involved in motor vehicle accidents were stabilized and transported safe to hospital. People ‘s conditions would probably have deteriorated, or worse, they could have died even without EMS interventions. “
The most memorable case he dealt with was one where a male patient underwent cardiac arrest while being transported to hospital. During that trip, Datt was able to resuscitate that patient by performing Cardiopulmonary Resuscitation (CPR).
But Datt worries that there are those in society who do not have an appreciation for such a necessary service. “EMTs are often not respected. Some members of the public do not co-operate with us when we arrive at the venue; some even give false information to dispatchers when calls are requested for an ambulance. We get quite a lot of calls, ”he said.
Another worrying factor is that there has been a delay in EMS expansion, Datt noted. “It would be a dream come true to see all Guyanese receiving pre-hospital care when needed. Lives would be saved, and people would be safely transported to a health facility in a timely manner, ”he added.
But Datt’s spirit is not scary. He believes that the negative view of EMS may be hindered by public awareness. Having done this, he believes that expanding the service to all regions could become a reality. With the training and development of EMTs to paramedic status, the service is expected to become even better, he noted.