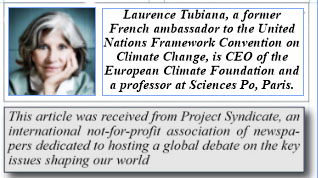 PARIS – In just one week during this year’s UN General Assembly, representatives of the world’s largest single market and the world’s second-largest economy put their climate cards on the table. One does not need to be a national intelligence analyst to apportion the results: the European Union and China are committed to achieving net-zero carbon dioxide emissions, thereby creating a common ground for much deeper cooperation.

To be sure, these commitments will need to be supported by explicit policies. But even words have power. Neither Chinese President Xi Jinping nor European Commission President Ursula von der Leyen are known for hyperbole or making major statements without prior consideration. If they set a clear target, that means they have some sense of how to reach it.

Moreover, agreeing on a more ambitious 2030 target is not easy for the 27 EU member states in line with its commitment to achieve net-zero emissions by 2050. European leaders are well aware of the a number vested. interests ready to oppose the new goal. Nor is it easy for China’s leadership to announce that it will hit peak emissions before 2030 and carbon neutrality by 2060. It is no small task to reorient an economy as large as China. Yet both powers recognize that the reality of climate change is making economic transformation inevitable, and that whoever moves first will have a major competitive advantage for decades to come.

Revamping an economy at the pace needed to reduce national emissions in line with the 2015 Paris climate agreement has never been done, and will require strong distributed leadership of an already emerging kind. Countries, regions, cities, and big business and financial actors have all begun to set themselves net-zero targets. Five years after the signing of the Paris agreement, these commitments show that critical mass is building. Chinese and European leaders recognize that this is the moment to move forward with concrete, detailed action plans.

There is no “one size fits all” scheme. Some plans involve technology changes, but many other transformations will require citizen ownership, a stronger emphasis on nature recovery, or a systemic approach. We can all learn from each other’s experiences along the way.

For its part, China will need to map a long-term strategy with specific milestones to reach its goal in 2060. Such a plan needs to be in place to ensure short-term decision-making – from the next five-year plan to Its Nationally Determined Contribution under the Paris agreement – consistent with China’s longer-term development trajectories. Otherwise, it is all too easy to continue kicking the same thing down the road indefinitely.

For China, key benchmarks include reaching peak CO2 emissions by 2025, setting more ambitious carbon densities (70-75% reduction), non-fossil fuel targets, and setting targets for reducing domestic coal consumption. Whether China can put an end to the construction and financing of new coal facilities – at home and abroad through the Belt and Road Initiative – will be a crucial test.

Fortunately, apart from the devastating impact of coal on the climate, it is not even economically viable. In 2019 alone, coal power generation fell by 24% in the EU and 16% in the United States, bringing it down to half of 2007. In China itself, almost 60% of the country’s huge coal capacity is running at a loss, giving the government every reason to extend its global leadership in solar and wind power, and using its international reach to promote renewable energy beyond its borders.

Like China, the EU will also need to demonstrate how it can meet its long-term targets. The European Commission has decided that a 55% reduction in emissions will be required by 2030 – at least – to meet its climate neutrality target. Now it must win the support of all 27 member states. The EU Parliament has asked for a target of 60%. The sooner a deal is reached, the better the EU’s opportunity to leap forward.

With the same goal in mind, China and the EU will have ample opportunity to deepen their cooperation. Both face similar challenges in recovering from the COVID-19 crisis, elevating the role of sustainable finance, managing debt relief, and ensuring a just transition for workers in carbon-intensive and other sectors soon to be affected. There is no need to limit collaboration to the national level. Partnerships between cities, regions, provinces and industries have already shown great promise.

If China and the EU reach their next big benchmarks, the global implications will be wide and deep. China, the “world factory,” was the largest single exporter and third-largest importer in 2018. By setting cleaner standards and focusing every society’s effort on achieving its net-zero target, it can affect significant change. on supply chains spanning Brazil, Australia, and Indonesia, as well as entire regions from Africa to the Middle East. The governments of the world will simply need to re-evaluate their long-term economic plans through a green lens.

Coming at the tail of negotiations with the EU, China’s announcement also reminds us of the vital role that diplomacy must play. Although the US has spent the last four years undermining multilateral institutions, international cooperation is still possible, and continues to offer profound benefits to its participants.

No matter how quickly the United States can return to the international community, the global trajectory is clear. The destination is net-zero, and all leaders would do well to chart their course accordingly.