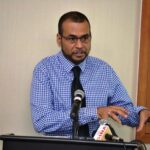 Kaietuer News – Guyana’s Foreign Secretary at the Ministry of Foreign Affairs, Robert Persaud, believes that the Diaspora cannot be excluded from any development plans for the country, in terms of its emerging Oil and Gas sector.

This, Persaud opined, has the enormous potential that exists in the Diaspora and not resident in the country.
He was at the time participating in a panel discussion on ‘Labor and Migration’ in Guyana hosted by the American Chambers of Commerce in Guyana (AmCham). He underlined that many countries around the world have turned to their respective Diaspora populations, not only for political purposes but for economic development.
As such, he announced that Guyana is currently pursuing a ‘Migration Policy’ for the country that would guide domestic labor market inflows and deal with inherent issues of citizenship.
Pressing on incorporating Diaspora members as a priority in national development plans, Persaud underlined that the Diaspora is currently highly skilled not only in the country but with capital support that could be refined for domestic investments.
He also highlighted repeated payments, it would be a mistake to exclude the critical contributor in any policy making in the short, medium and long term.
According to Persaud, the projected boom in Guyana’s emerging oil industry is also considered a boom for those in the Diaspora who want to invest or contribute.
Building on the spread of migration policy, it set out a commitment to best integrate migrant labor into the domestic economy, to ensure not only the humane treatment of migrants but to ensure that Xenophobic trends do not affect the domestic population.
According to Persaud, the skills gap also needs to be recognized locally and how best to find this from the Diaspora and elsewhere.
With regard to migrants entering Guyana, the Foreign Secretary emphasized that the reality is that migrants of all persuasions are “on the steps of our door”.
He said that in addition to ensuring that migrants are treated humanely, the administration is also well aware of the importance of labor, migration and the potential impact on the country’s growth.
As such, he noted that the proposed migration policy is a document where “we want to ensure that, as we undertake this difficult task of managing these forecasts and targets, we are delivering positive outcomes for natives and migrants. “
The Foreign Secretary’s position was voiced following the announcement of a major Diaspora virtual conference, to be held next month.
The conference will see the participation of President Irfaan Ali as a featured guest.
Persaud said key agencies such as the Guyana Finance Authority (GRA) and the Guyana Investment Office (Go-Invest) will be involved.
According to the Foreign Secretary, the conference is seen as one part of taking forward the government’s plan to engage and involve the Diaspora in support of its national development priorities.
He said with the work done in recent months, the recently re-integrated Diaspora Unit was able to identify interest in the Diaspora and will use the conference to initiate the level of engagement required.