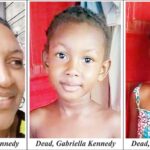 Kaieteur News – More than a week after a Bartica woman and her two young daughters were burned alive, allegedly by the woman’s husband who is also the father of the children, the case file has been sent to the Prosecuting Director Public Service (CPD) for advice. Also the suspect is still in hospital.
This is according to Regional Manager Dion Moore, who also noted during a telephone interview that the police are currently awaiting advice from the DPP on the way forward in the matter and that the suspects are still in hospital receiving treatment for the injuries he received during the fire.
Last Saturday, December 12, at Four Miles Squatting Area, Potaro Road, Bartica, tragedy struck after a man allegedly set fire to a house killing his wife Carolina Kennedy, 48, a housewife and their two daughters – Mariana five years old and Gabriella Kennedy, three.
According to police, about 21:30 hours, an unknown caller called Bartica Police Station to report the fire. However, the fire truck was unable to reach the location and a bucket brigade formed. When police and fire service ranks, the wooden structure was completely engulfed in flames. After the fire was extinguished, ranks found the lost remains of Kennedy and his two daughters in the southeast corner of the house.
Subsequently, the victims’ bodies were removed and taken to Bartica Hospital Mortuary.
A search was launched for the suspect and found in some bushes near the house. While he was being put in the back of a police vehicle, the suspect admitted to the horrific crime.
Based on a video seen in this publication, the suspect could be heard saying, “It’s oppressive, I can’t steal it any more, I can’t steal it any more buddy … you know wuh is coming home and meeting your lady talking to another man and her brother deh there? ”
Kaieteur News had reported that Kennedy and the suspect had been living together for the past six months and during that time, the woman had made several complaints to her mother about the suspect threatening her when drunk.
A week before the incident, the suspect allegedly threatened to burn the house down to kill Kennedy and her daughters. The woman had been encouraged to report the matter to the police and had planned to visit the station on Monday December 14, 2020 but had been killed a day before. The suspect was also found guilty in 2018, of assaulting Kennedy.