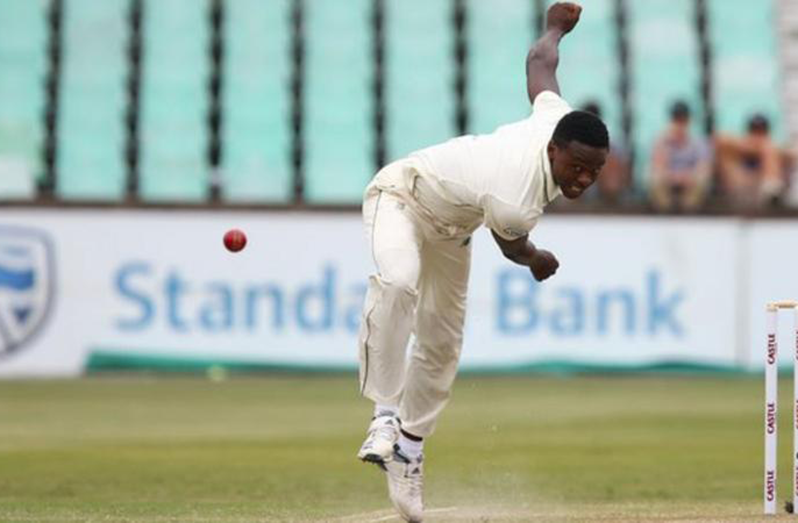 KAGISO Rabada reached 200 Test wickets but South Africa suffered a slight fall late on the third day of the first Test against Pakistan in Karachi.
The sailor, 25, kicked Hasan Ali’s wicket to become the third fastest in South Africa to achieve the milestone.
Pakistan posted 378 all out, ahead of 158 thanks to a last wicket stand of 55 between Yasir Shah and Nauman Ali.
South Africa ended 187-4, leading 29, after losing three late wickets to pass the advantage back to the hosts.

With Pakistan heading into the day at 308-8, leading by 88, Rabada pulled Hasan’s middle stall second over the morning to reach 200 Test wickets from 44 matches.
He became the eighth South African to achieve the feat, with only Dale Steyn (39 Tests) and Allan Donald (42 Tests) doing it in less time.
Rabada is also the fourth youngest to capture 200 or more wickets, behind Waqar Younis of Pakistan and Indian duo Kapil Dev and Harbhajan Singh.
After the early development of Rabada, Yasir and Nauman frustrated the tourists to extend the first important front of the pub.
No. 11 Yasir struck four boundaries and launched longtime hitter Keshav Maharaj for six on his way to 38 of 37 balls, before spinner caught Nauman lbw at 24 to finish off Pakistan pubs.

Markram & van der Dussen fight back before the small collapse
In response, South African opener Dean Elgar was struck on his finger by sailor Shaheen Afridi and looked in discomfort as he was treated by the physio.
Elgar soon fell at 29 to superb diving catch by wicket keeper Mohammad Rizwan off Yasir bowling.
After managing only 47 runs in the afternoon session, South Africa accelerated after tea as Aiden Markram and Rassie van der Dussen shared a second-wicket partnership of 127.

However, the tourists, looking in control at 175-1, then lost three wickets for 10 runs.
Yasir, the leg spinner, grabbed two more wickets with van der Dussen caught by Abid Ali in the silly referee at 64, and Faf du Plessis holding lbw for 10.
Markram’s opening shot of 74 – which included 10 boundaries – ended when he was dismissed by spinner Nauman, with Abid grabbing another simple catch.
Maharaj – not out on two – and captain Quinton de Kock – yet to score a run – will return to the middle today as South Africa look to set a defensible target. (BBC Sport)