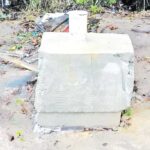 Kaieteur News – It’s been five months since a standstill was installed for a $ 5.1M water fountain to serve the community of El Paso in Region Eight (Potaro-Siparuni), leaving residents without access to potable water.
The water fountain has been left incomplete since last November when residents complained about the substandard work carried out by the contractor hired through the Guyana Water Incorporated (GWI). Kaieteur News understands that the community has not received any word from GWI upon completion of the well.

Residents had reached out to this announcement lamenting that the water fountain was only partially serviceable and only provided water to a school in the community, leaving the rest of the community without it. The furious residents also referred to the situation as “utter disrespect” to hard earned taxpayer dollars calling for a quicker resolution.
When Kaieteur News contacted Mahdia Mayor David Adams, it was revealed that Mahdia’s Mayor and Town Council contributed about $ 4.5 million to the project. He was keen to point out that the Council had no supervision over him, as the money was given to GWI who contracted a Brazilian company, Fox Services and Trading, to drill the well. It was said the well was supposed to be dug at 150 feet but the contractor stopped at 90 feet. The reason given was that they encountered rocks, preventing them from further drilling.
Adams also revealed that the company claimed to have encountered equipment problems and that it had to bypass the project to go back to GWI in order to make repairs. Even after this was done, residents were given another excuse. The contractor told the community that they had been sent to Port Kaituma, in Region One (Barima-Waini) to build another well. Adams was told that they would return upon completion of the new assignment.
The works at Port Kaituma were only expected to last three weeks. And yet, the company has not returned to Region Eight to finish what it started.
This resulted in residents again contacting this publication to express their disappointment. The Mayor, frustrated as well, told Kaieteur News that he has not yet received word about the project.
As a result of the contractor’s negligence, the Mayor said residents were forced to use water from the inlet in the community.
GWI stated that as the existing well cannot serve the whole community, it will only be used to supply water to the school. It was hoped that another water fountain would be built in another part of the community, to provide drinking water for all residents.
However, that would require additional funding. Unfortunately, the Town Council had no more money to pay on this additional project as most of its investment ($ 4.5) went to the first well, totaling $ 5.1.M.