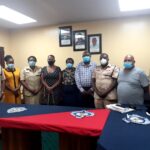 Kaieteur News – It’s been more than five years since a report was made about the alleged rape of an 11-year-old girl, and the offender has not been brought to justice.
The young girl, now 16, recently entrusted a couple over alleged rapes by her father, stepfather, brothers and even one of her cousins.
After hearing the teenager’s story, the couple reached out to Facebook activist Melissa Atwell, who is popularly known on social media as Melly Mel.
In a Facebook live Sunday night, Atwell shared the story and called out members of the Guyana Police Force (GPF) for, “The lame and ridiculous that happens in the GPF as it relates to rape victims.”
Seeking to bring clarity to the issue, Regional Manager Errol Watts invited Atwell to a briefing at Leonora Police Station. The meeting was attended by a member of the Child Care and Protection Agency (CPA), the head of the Division Three Crime Division and investigators working the case.
Following the briefing, Atwell stated in an update on her Facebook live Monday that after going through the statement made by the girl in 2015, she understood, “The perpetrator was arrested, charged and is being prepared for court. ”
According to the activist, a few days after, the file was sent back by the Department of Public Prosecution (DPP) advising police to charge the alleged perpetrator. The teenager’s mother was allegedly taken back to Leonora Police Station and made a statement that she no longer wanted to pursue the matter.