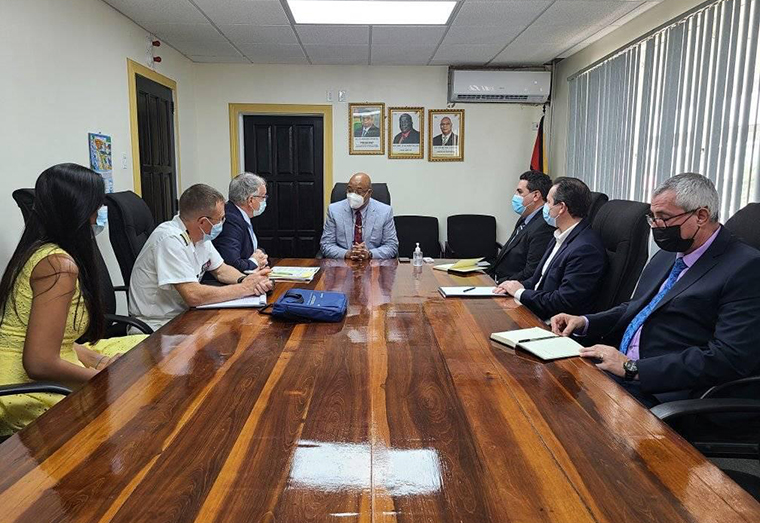 By Rehana Ahamad
AMBASSADOR of the French Republic to the Cooperative Republic of Guyana, Antoine Joly, has signaled his country’s interest in building the Guyana bridge link to Suriname.

This was confirmed by Public Works Minister Juan Edghill, who reminded that the Expression of Interest (EoIs) deadline for the project is February 15, 2021. On Monday, Minister Edghill met with a delegation including the ambassador, along with members of his team – Mr. Jean-Francois Gerin, Mr. Christophe Sureau, Mrs. Christine Sureau, Mr Yorgo Hernandez and Mr. Philippe Lamouret.

During the meeting, potential areas for future cooperation were discussed, and the French Ambassador shared an interest in assisting with the maintenance of Guyana’s ships, as well as an interest in building the Corentyne River bridge. Edghill had previously said that, if all goes well, the bridge connecting Guyana and Suriname could be completed and used before the end of 2025. In early December, the Public Works Administrations invited both countries ( Guyana and Suriname) EoIs for the provision of consultancy services for “carrying out a feasibility study and preparing detailed designs for the construction of the bridge over the Corentyne River and accessing roads linking Suriname and Guyana.”

According to the invitation issued, “The objective of the consultancy is to carry out a feasibility study, including environmental and social impact assessments and prepare detailed designs, drawings, cost estimates and application documents for the construction of a bridge linking South Drain, Suriname and Moleson Creek , Guyana. ”This particular assignment has a 12 month timeline attached.
Minister Edghill told the Guyana Chronicle that a technical team had been assembled to ensure competent and transparent operation of the bridge construction. That team is led by Minister Edghill and his Surinamese counterpart, Riad Nuiermohamed.

In assessing submissions, consideration will be given to technical competence, financial capability, qualifications, existing commitments and, importantly, the proposer’s experience on similar projects, both locally and regionally.
“The Governments of Suriname and Guyana reserve the right to accept or reject late applications or to cancel the existing invitation in whole or in part. It shall not be bound to set aside any reason for not shortlisting any applicant and shall not meet any costs incurred by any applicant in preparing and submitting Expressions of Interest, ”the published notice read.

At the meeting on Monday, Minister Edghill said the French would be very welcome to submit their EOIs for not only that project, but the many other initiatives that are part of the government’s transformational agenda. The Minister of Public Works linked the government’s desire to build the capacity of the local workforce through cooperation with the French. He also highlighted the importance of maintenance to the local fleet of ships, especially as two are currently in a dry dock awaiting repairs.

Currently, the MV Kimbia and the MV Barima are docked for emergency repairs. A press release from the Ministry of Public Works explained that the MV Kimbia had developed a hole in his arch and was currently in a dry dock at the Guyana National Industrial Corporation. This ship is expected to be fully operational by the end of January.

Meanwhile, the MV Barima had experienced engine failure for its port engine. The Ministry of Public Works and the Department of Transport and Harbors Management have noted that stringent efforts are being made in collaboration with private sector members to get the ship up and running in the shortest time possible.