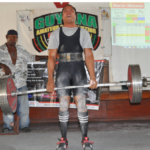 Kaieteur News – In its own simple way it touched the lives of many current and past athletes, especially in the world of powerlifting and its efficiency in preparing the weights during the competition as a spectator / loader.
The name Orin Timothy may not have been popular but when one heard the name ‘Dawg’, it resonated in many circles including bodybuilding, weightlifting and around the cinemas in the city as a ‘chucker-out’.
Many would only really know after their demise, unfortunately so. The death of Orin Timothy, a former member of the Kingsrow Barbell Club qualifies as one such case. Timothy’s friend and former bodybuilding colleague ‘Uncle’ Noel Cummings shared a bit of history he had about his friend yesterday with Kaieteur Sport.

Orin ‘Dawg’ Timothy takes the moment as ‘Uncle’ Noel Cummings is awarded for winning the Over-40 competition at the Tower Hotel.

Uncle Noel recalls that they both competed in bodybuilding back in the 1980s and early 90s when Timothy had a twin sister who died a few years ago.
“I know he has an older sister who lives in England now. But we competed together back in the days in a few competitions. I can remember an over-40s competition in the early 90s held at the Tower Hotel organized by the late Claude Charles.
Even before that, in the early 70’s we also competed in the GDF Gym along with people like Frank Tucker, Arthur Alleyne, Lewis Dean, I was about 18 at the time and he {Timothy} was about a year older than I. Another. a competition I can remember was at Parade Ground one Sunday morning organized again by Claude Charles. Timothy was not happy with the results given by the judges and he and Charles disagreed; I think that was his last competition. ”
His love of the weight sport was such that even after his hot bodybuilding career, ‘Dawg’ would make the trip to powerlifting competitions to absorb and eventually become a full length spinner / loader to the time of his passing.
He would have served under GAPLF led by Peter Green and was honored by that body. After Green passed the baton, ‘Dawg’ diligently served under GAPLF, led by Ed Caesar, taking the title, Honorary Spotter / Loader.
Current GAPLF Executive Member Martin Webster has noted that the fraternity is saddened by the death of a loyal soldier whose contributions over the years would have contributed to the athletes’ success and the sport.
“May the pressure up there be as light as they were for you down here RIP.”