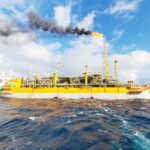 ExxonMobil had been torching gas in the Liza Destiny ship all year, despite the fact that the gas was due to be re-injected into the reservoir. This photo, taken a few days ago, shows Exxon blazing during the day.

Kaieteur News – As production at Liza Destiny’s Floating Production and Unloading (FPSO) ship reached full capacity of 120,000 barrels of oil a day, ExxonMobil claimed to have “successfully commissioned the gas injection system”, reported previously it was defective, thereby causing Exxon to flame billions of cubic feet of toxic natural gas. These and other details were shared by ExxonMobil Guyana President Alistair Routledge yesterday.
“Earlier this month,” said Routledge, “we were able to reduce the torch to its background levels, only to pilot flare levels and now we are operating to the best of our ability.”
Research shows that combustion requires three ingredients: fuel, an oxidizing agent (typically oxygen in air), and heat (or source of ignition). Flares usually operate with those said pilot flames to provide the ignition source, and they use ambient air as the oxidizing agent.
This recent development follows a whole year in which the oil company failed to mitigate the torch at Liza-1, its first major field development in Guyana. Exxon was only due to flame gas at the end of December last year at the start of the project, in order to fully test and commission the on-site gas compression and injection systems.
However, the company would eventually flash gas longer than expected because of what it said were faulty main compressor and injection gas compressor.
According to an Environmental Protection Agency (EPA) brief, ExxonMobil had said the third-stage flash gas compressor and suction silencer had been sent for repair in Germany and were returned to Liza Destiny’s FPSO at the end of October.
The EPA had said the same was being reinstated and was expected to resume operation in mid-November. Exxon, according to a November update, had expected the equipment to take a week to two weeks of testing to confirm that the repairs and modifications were working.
Notably, in late October, the company flaunted more than 16M cubic feet of natural gas, thus making Guyana one of the top five countries in the world for a year-on-year per capita flame. In September, Guyana had tracked Libya, Gabon, Oman, Qatar and Iraq, in total gas flame per capita, judging from statistics from the World Bank’s Global Gas Flame Tracker Report (July, 2020). However, the rising torch in October caused Guyana to surpass Iraq.
The company claimed it had to flame, as its gas compression equipment was faulty and needed repair abroad. The repairs were reportedly difficult to get in a hurry, given restrictions imposed by the COVID-19 pandemic safety guidelines on companies. Exxon has not yet completed the repairs to all of its faulty equipment.
Yesterday, Kaieteur News reached out to ExxonMobil’s Public Affairs and Government Adviser, Janelle Persaud, in seeking answers on whether, and at what date, the oil company’s gas compressor had been fully repaired; what was specifically repaired on their faulty equipment and at what cost, and at what date the torch was finally over.
Persaud failed to share specifics on the details requested by Kaieteur News. Instead, he sent a link to a video statement from Routledge, which did not mention any details of the company’s blaze.
Notably, EPA Head Sharifah Razack has promised to share with Kaieteur News details on Exxon’s updated flare up details, today.