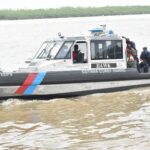 GDF, US Coastguard to conduct Guyana offshore exercises this weekend

Kaieteur News – The Guyana Defense Force (GDF) and the United States Coast Guard (USA) are expected to embark on their first joint service operation tomorrow to combat illegal fishing activities in local waters.
According to a GDF press release, on Saturday, the GDF and the US Coast Guard will take part in their first series of activities, stemming from the Shiprider Agreement signed last September by the two countries.
The Shiprider Agreement was signed by Secretary of State Mike Pompeo and Guyana Defense Force (GDF) Chief of Staff, Brigadier Godfrey Bess, during the officer’s high-profile publicity visit last year. The agreement allows the U.S. Coast Guard to patrol local waters along with the GDF coast guard to combat illegal activities.
The US Coast Guard will use its Cutter Stone ship, one of its newest, to conduct the joint service patrol.
On December 28, 2020, the US flagship left Pascagoula, Mississippi, for a multi-month operation in the South Atlantic to help counteract illegal, unregulated and unreported fishing, while strengthening relationships for maritime sovereignty and security throughout the region.
The brand new Legend Class national security breaker will provide presence and support national security objectives throughout the Atlantic.
Kaieteur News had reported, based on a statement from the US Coast Guard, that the multi-month patrol is the cutter’s initial shaking cruise, having been completed in November 2020.
The statement also stated: “This is the first service patrol to South America in recent memory, engaging with partners including Guyana, Brazil, Uruguay, Argentina, and Portugal. The cutter also initiated an observer from the Portuguese navy throughout the operation. ”
The visit comes as a major border case is drawing the attention of the International Court of Justice in The Hague, The Netherlands.
The case focuses on claims from neighboring Venezuela on large parts of Essequibo, Guyana’s gold-rich country, and offshore areas of Guyana where ExxonMobil currently produces oil for Guyana.