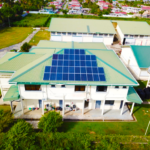 One of the buildings worn by GEA with solar photovoltaic systems.

Kaieteur News – In recent days, Guyana’s leadership has been landing connected gases from Liza’s well 1 – Guyana offshore – to generate electricity but the country’s leading energy agency is continuing its push for an energy mix using a majority renewable energy like solar energy.
To this end, the Guyana Energy Agency (GEA), the country’s leading organization for the domestic energy sector, has recently invited proposals to supply, install and commission a number of separate off-grid systems and electrical distribution networks.
According to invitations to a proposal submitted by the GEA, the entity is seeking qualified bidders for a 171 kilowatt-hour (kWp) photovoltaic set up in St. Monica, Region Two.
In a separate invitation, the company said it was looking to get a similar installation at the Capoey Mission for about 171 kilowatt hours while another facility is projected at 39.5 kWp for Capoey Lake Top.
GEA in recently advertised invitations also called on companies to provide services for the design, supply, installation and commissioning of a 153 kWp off-grid solar photovoltaic micro-grid system and electrical distribution network in the communities of Tapakuma Mainstay-Whyaka and St. Deny’s Tapakuma. .
The entity has also invited companies to submit their proposals for the design, supply, installation and commissioning of a 244 kWp photovoltaic solar micro-grid system and electrical distribution network in Waramadong, Region 7.
The head of GEA, Dr., recently revealed. Mahender Sharma that the Agency is looking at a domestic energy mix to be developed over the next five years of some 400 megawatts (MW) of installed capacity in the country, “over 200MW, in the interim of natural gas. ”
Dr. Sharma at the time discussed renewable energy and the investment opportunities in Guyana during a webinar hosted by the American Chambers of Commerce in Guyana (AmCham).
Highlighting how the agency intends to reach its goals, Dr. reminded Sharma among the key objectives of Guyana’s energy policy is to reduce electricity costs for households and businesses; making Guyana’s energy cost globally competitive; working with Brazil and Suriname to create a new energy corridor; and outline a clear path to becoming a net energy exporter.
This, he noted, would be accomplished by not only upgrading the national grid but completing the Amaila Falls Hydro Electric Project, investing in solar and wind systems for off-grid areas, and expanding hinterland electrification for off-grid grids the grid and micro-grids. .
According to Dr. Sharma, in the next three years alone, some 39MW would be added to the grid using solar farms and other such smaller systems over the next three years.
Dr. Sharma also noted that in recent years the government had already outfitted about 291 state buildings with solar systems for generating electricity, an initiative that had caused savings of about $ 500M.