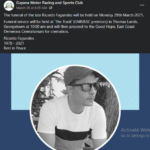 Kaieteur News – The Guyana Motor Racing and Sport Task Force (GMR & SC) based in Thomas Lands, Georgetown has been ordered by the Covid-19 National Task Force (NCTF) to close its doors for a month. According to a member of the NCTF, GMR & SC operations were suspended between March 30 and April 30 because it violated Covid-19 guidelines by holding a large assembly on March 29.
That meeting, Kaieteur News was told, was the funeral service of the slain gold dealer, Ricardo Fagundes, better known as “Paper Shorts”.
Fagundes, a member of GMR & SC, was gunned down on March 21 in front of Palm Court by two men who got out of a white Toyota Fielder wagon.
On March 26, on its Facebook page, GMR & SC announced that his funeral would be held at his Thomas Lands building. In a subsequent Facebook post, which it made on March 28, just days before the service, GMR & SC stated that attendees must “follow all Covid-19 guidelines and wear masks”.
The NCTF noted that while the majority of attendees had received masks and attempted to sanitize, there was very little social distance. The listed Covid-19 measures prohibit people from holding large gatherings such as funerals, parties, etc. The NCTF noticed that more than a hundred people attended Fagundes funeral service and decided to suspend the club’s operations.