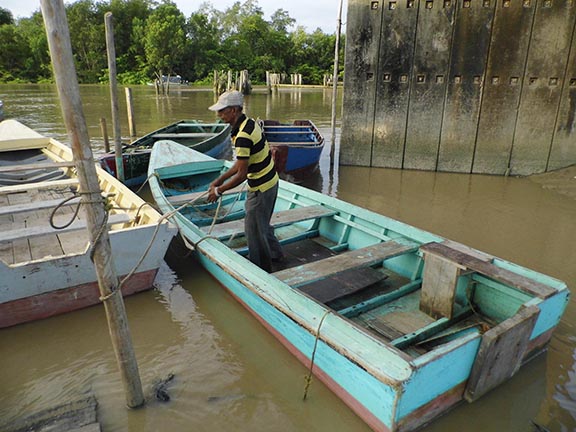 For some, fishing is a great sport, hobby or leisurely way to pass the time on a Sunday afternoon. But for residents of Sheet Anchor Village, East Canje, Berbice, fishing is more than a living and a way to feed their families; it is a way of life. Fishing for the close-knit community, means a way out of poverty; a way not to go hungry; and a way to paint the village in a bright and positive light in contrast to the criminal image held by society. Or at least it was at one time, before the construction of the Berbice River Bridge and increased commercial activities in the Berbice River. Now, fishing is nothing but a dying industry in the village. 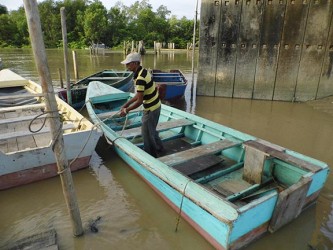 In the 1960s and 1970s, Sheet Anchor Village was just a speck on the Berbice county map, with a few scattered squat houses crowded with two to three generations of families. Crime, especially robbery and robbery, domestic violence and neighborhood tongues that turned into family wars were what highlighted the village on the map. This was the way of life, until villagers decided to use the Berbice River that borders the village to catch fish. Fishing then became a way to climb out of poverty and develop a level of respectability. Families were able to feed themselves and generations were able to leave their family homes and branch out making lives for themselves at ‘fish scales.’

Fast forward to Sheet Anchor today and it would be accurate to say that the fishing business was once very prosperous in the village, but no longer. Nearly 90% of the village is involved in fishing in one way or another, from the fishermen who go out to catch the fish, and the women who go around selling the catch , to the individuals selling and repairing the equipment, including boats, machinery and seines. During a recent visit by Lifestyle, the shout was the same from everyone involved in the industry, “Business is bad, bad, bad.”

Christandat Jadundan, aged fifty-five, has been fishing for a living since the age of 16, and is deeply invested in the industry. It has become a family business with his wife, sons and sons-in-law all involved. He says this is the first time in his entire life he has experienced such a hunger for fish. “It is as if God is drying up, causing rare fish to run now. Phagwah Day (March 6) was the height of spring and we could hardly catch any fish, ”he lamented.

The fishermen in the village only fish inshore. Using Chinese seines (and sometimes fishing hooks) they venture out into the mouth of the Berbice River and make fish pens where they finish the fish. “We juk down wood in the sea and we use it

something calls going after and we had to juk it as picketists through to make it funnel, ”explains Jadundan, adding that usually 300 to 400 feet long is raised on both sides. The men usually work in pairs and it takes an average of four hours to complete the fish pen. When completed, the men drive the fish to the pen and catch them with the seine.

The tide controls the fishermen’s working hours and so they have to be adjusted. “We go out early, sometimes 7.30 at night and come back around midnight or 1 am; but we work with the tide, so as the tide changes we have to adjust ourselves, ”says Jadundan.

The men fish in spring and tide, though they prefer spring tide because it gives them better catches. “When fish are in season, especially during the spring tide, we catch about five to six baskets of mixed fish: unrivaled fish, scale fish and shrimp,” he said. Unfortunately, the current weather of unusually high winds and heavy rainfall makes an already frustrating job even more difficult. Now the men count themselves lucky if they even get half a bucket of fish on each trip.

These are very hard times and it is having a detrimental effect on the fishermen. “This is our livelihood we depend on and sometimes we go out there and we get nothing; we lose our gasoline and all that, ”said Jadundan. With every trip the men take, they carry over $ 1 million with them in gear (boat, engine, seine, baskets, string, hooks, etc.) but they have no guarantee that the trip pays off.

“Sometimes when the wind is blowing high, it’s very rough; the waves are so rough that we have to come back

not installing a seine, ”said Jadundan, noting that this is happening right now. “Like all this it is very rough, sometimes our boat is piercing and we have to rush and get off. My son-in-law only recently went out and it was so rough, the waves pick him up [the boat] and fling it down in pursuit and pierce it. God saved him because he had barely made it home alive. ”

By nature, aside, there have been other negative effects. The Berbice River Bridge, located at the mouth of the Berbice River, is one of the factors that fishermen attribute to the poor catches they have been having. According to the fishermen, the location of the bridge has slowed the tide leading to a reduction in fish being swept ashore.

Kenny Dhanpat, 54, who has been fishing since leaving school at 14, said, “We use to get free flow from the stream, but since they have many things that occupy the Berbice River, like the bridge, that is what slows it down. We used to catch a lot of fish, now sometimes when we go we can’t even get a half tub. With the storm and now the activities in the river, we are not getting fish at all. ”

Dhanpat said he fished for a living and to feed the community but “sometimes we are lucky to come in alive.” He explained, “When you go out there and the breeze torments you, you have to come back. So there is never a guarantee when you go out then you return with custody. ”

On average, the men held $ 10,000 to $ 12,000 in fish (sold wholesale) and the business was considered a success. When fish were generous, they would wholesale them so that sellers could make a decent profit. However, when fish are in short supply, as is the case now, the fishermen are forced to retail themselves to try to cover their overhead costs.

Dredging in the Berbice River also affects the fishermen. “You see them as foreign companies that come and do business, like Oldendorff, they juk enough piles in the water and so the tide is not running like before and the mud coming and silting up to form banks, ”said another fisherman. “Next thing, they got the dredging, that dredging night and day in the sea and when they are digging, the mud is falling right in the vicinity of where we fish. The tide therefore has no power to move. ”

Fisherman Danny Ramdat highlighted yet another challenge. “The region (RDC Region 6) is cutting grass and it floats down and cuts all the fish we fish. They cut it every May-June when the black water comes out and the grass gets big and heavy, ”he said. He also mentioned the increase in commercial activities in the Berbice River which had had a negative impact on their livelihoods, but noted that it was a desperate situation and nothing could be done about it. “… All the noise and equipment they use scares the fish away but we can’t do anything about it. They have to do their job and we have to do our job. “

Smiling wryly, Ramdat revealed that he was born and raised in fishing and has never done any other job.

The stronger effect is that many other businesses are affected. Fishmongers must now go outside the village to acquire fish for sale. Because of the trials as well, at least 30% of village anglers have called it quits, and this has resulted in less business for the individuals who specialize in selling and repairing fishing gear. Moreover, fish is now very expensive. For example, people now buy 2 Bangamary fish for $ 500, but, before, they could have had a whole bucket for $ 2,500.

Nevertheless, some of the fishermen are still slipping in hope that the fishing industry will stabilize and return to some similarity of normality. “This season is very bad but we won’t give up,” fisherman Seon Dhanpat declared. “We use to catch fish every day, now it’s like once a week.” He uses an average of 5 gallons of gasoline per trip and as there is no longer any guarantee of success, he has scaled back on the number of trips. “I used to enjoy fishing; when you set up your seine and you see the fish running and you don’t even have enough boats to store it, ”recalls Dhanpat. With his face clouded by the storms that are currently afflicting the fishing industry, Dhanpat said “now fish are not running so I don’t enjoy it anymore; it is too frustrating. “She said resolutely though,” I’m going to continue to work it as it is … At the moment I’m not working for profit, I’m working to survive and feed my family. ” The men pay $ 10,000 each year to renew their fishing licenses but are not part of any co-operative society.