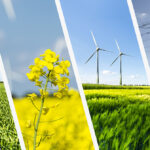 Kaieteur News – The Government of Guyana, in effect from March 1, 2021, has implemented a financial incentive for the renewable energy industry and has since exempted items for business use, from payment of any Value Added Tax (VAT).
The Order was made that gave effect to the government’s incentive under the Value Added Tax Act, which restructured the schedules for goods and services that are either zero-rated or excluded all together.
The provisions of the Order were signed by the Significant Minister with responsibility for the Finance Portfolio in the Office of the President, Dr. Ashni Singh.

According to the notice – since it was published in the Official Gazette and subsequently in parts of the daily newspapers – exempt from VAT charges are machinery and equipment acquired for generating and using electricity from renewable energy sources.
The Order stated that these include solar panels, solar lamps, deep cycle batteries, solar generators, solar ovens, solar water heaters, solar refrigerators and freezers, solar air conditioners and inverters.
These, as well as water turbines, wind turbines and energy efficient lighting, include compact fluorescent lamps and LEDs.
In addition, the supply of machinery and equipment for the use of alternate energy technologies and renewable energy options, such as gasifiers to use biomass and harness renewable energy through wind, solar and water, as determined by the Commissioner, were also exempt from VAT payments.
The VAT exemption warning comes at the center of Guyana Energy Agency’s (GEA) active drive towards establishing a domestic energy mix for development over the next five years of some 400 mega watts (MW) of installed capacity in the country .
This is the address of Guyana’s key energy agency, which falls under the portfolio of the Prime Minister and President.

According to the Head of GEA, Dr. Mahender Sharma, the agency’s overall strategy is rooted in the accusation presented to open the 12th Parliament by President, Dr. Irfaan Ali, who summarizes the thrust of the GEA’s energy policy going forward.
He reminded of the encouragement of Dr. Ali said that “Guyana’s energy security will be driven by an energy mix that will see solar gas, wind, hydro and natural gas, all key components in making us the region’s energy capital.”
According to Dr. Sharma, included in the specific targets, as expressed by the Office of the Prime Minister, is “to develop a world class energy mix, and install 400MW of new installed capacity including hydropower, solar, wind and natural gas. ”
He noted that natural gas had been considered to supply approximately 200MW of the proposed 400MW installed capacity, meanwhile only.
Notably, the warning comes as a result of the GEA inviting interested companies to bid for the design and installation of a number of small grid solar systems, and electrical distribution networks.
According to the invitation to bid submitted by the GEA, the entity is seeking qualified bidders for a 171 kilowatt-hour (kWp) photovoltaic system set up in St. Monica, Region Two.
In a separate invitation, the company said it was looking to get a similar installation at the Capoey Mission for about 171 kilowatt hours while another facility is projected at 39.5 kWp for Capoey Lake Top.
GEA, in recently advertised invitations, also called on companies to provide services for the design, supply, installation and commissioning of a 153 kWp off-grid solar photovoltaic micro-grid system and electrical distribution network in Mainstay-Whyaka and St. . Deny’s Tapakuma Communities.
The entity has also invited companies to submit their proposals for the design, supply, installation and commissioning of a 244 kWp off-grid photovoltaic solar micro-grid system and electrical distribution network in Waramadong, Region Seven.
According to Dr. Sharma, some 39MW would be added to the grid using solar farms and similar smaller systems over the next three years.
Dr. Sharma also noted that in recent years the government had already outfitted about 291 state buildings with solar systems for generating electricity, an initiative that had caused savings of about $ 500M.