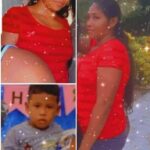 Dying: Agatha and his grandson, Marley0

Kaieteur News – His grandmother and grandson, 2, died Friday following a boat mishap in the Pomeroon River, Region Two.
Meanwhile, the grandfather who was a captain on the boat and was said to be drunk at the time is in police custody.
Agatha Gill, 38, and the toddler, identified as Marley, drowned at about 20:00 hours in the Friendship Canal, Lower Pomeroon, Region Two.
Earlier that night, Agatha, also known as ‘Anti Gata’ and her husband, Riley Gill, had left their Friendship Canal home in a wooden “balahoo” boat to stock up alcohol in the area . The couple took Marley, who was left in their care, with them.
According to police, while returning from a drinking session, an intoxicated Riley Gill lost control of the boat, which was powered by a 75-horsepower engine.
He told investigators that as he entered the Friendship Canal, his propeller had hit a coconut press causing him to lose control of the engine.
The boat then crashed into the edge of the river bank on the left side and capped, covering them below it. He managed to free himself but his wife and grandson remained trapped under the boat.
He claimed to have tried to free them but all his efforts were futile.
Kaieteur News understands he then alerted nearby residents who rushed out to help him turn over the boat.
Unconsciously, Marley and his grandmother were taken to Oscar Joseph District Hospital, Charity.
Doctors there pronounced the two dead on arrival. Their bodies were taken to the Suddie Morgue, on the Essequibo Coast, Region Two.
The reported drunk grandfather was taken to police custody at Charity Police Station.