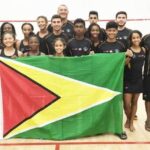 David Fernandes (second left, back row) with his active executive.

Kaieteur News – On January 28, 2020, the Guyana Squash Association (GSA) under the leadership of David Fernandes kicked off the year in a promising manner with the staging of the first BCQS Squash Masters Tournament in Guyana.
When the dust was settled Dennis Dias won Guyana over 65, Narendra Singh of Guyana over 55, Bajan Mark Sealy won the over 45s, and Shaun Simpson of Barbados won the over 35s, while he won Guyanese Lydia Frazer of the Department of Women over 35. BCQS Director Sanjay Amin lost to Singh (8-11, 11-5, 11-2, 11-9) in the over 55 final. Anyway, after staging the Bounty Farm Handicap tournament that ended Feb. 16, Guyana confirmed its first case of the coronavirus when a 52-year-old Guyanese woman traveling from New York died on March 5, on March 11, bringing a stop to all sports, including Squash, that month.
It’s been 10 months since no Squash tournament was played in Guyana, with the 83,000-square-mile South American Country bordering Suriname, Brazil and Venezuela, being locked down in March.
This was done to combat the spread of the deadly Covid-19 virus where the positive outbreak has now surpassed Spanish influenza, a pandemic that devastated the World back in 1920, the outbreak of Cholera that occurred a hundred years earlier and the Plague in 1720.

Lydia Fraser was the Women 0-35 at the DSPQ Masters Tournament in February.

Shomari Wiltshire was expected to lead a strong Junior Guyana to CASA this year.