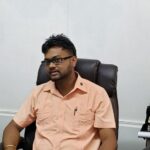 Kaieteur News – Georgetown Mayor Ubraj Narine claims the government is pushing the Mayor and City Council on city projects.
During a press conference on Friday, the Mayor said that the Ministry of Local Government and Regional Development had been exhibiting very shady behavior because they were undertaking city-wide projects, while failing to consult the council.
He emphasized that the Ministry has not been showing any effort to engage in collaborative efforts with the council. “The Minister must run that Ministry in a professional way and stop playing politics with people’s lives and wellbeing and the development in this city. I’m shocked to know that these things are happening in our country, ”said the Mayor.
Narine revealed that as it related to contracts and other relevant information about city projects, the Ministry had been holding them back from the council. He said that the council had even written to the Permanent Secretary of the Ministry of Local Government requesting copies of the documents for all the projects that they will embark on, but they have never received a response.
He further said that when questioned, ministries officials told the council that they are not required to provide them with any documents.
During the conference, Narine showed documents from an old project that took place in the Bourda market, aided by the previous administration. He said the reluctance to share information did not happen under that government.
He held the importance of the city council having all the information about city projects because they had to know what to report to their constituencies. “We are not against development. We want to develop, but let’s do it in a way that all parties are involved. We don’t want to do things in a way where we get criticized. We want an improvement for the people and that’s what this City Council is working towards, ”the Mayor also said.
It was revealed that his recent statements came as a result of the Ministry’s failure to consult the council on a project being carried out at East Ruimveldt Market, although the market is the responsibility of the city council.
He referred to this as a “clear pattern” observed with the Ministry.
Narine also talked about an upgrade being carried out at Waterloo Street Avenue and Carmichael Street Avenue, where he noted that a meeting had been held and the city engineer was instructed to obtain documents for that project, but the city council had ‘To conclude completely from that one as well.
He said the council had made several contributions to the project under the previous government and even offered some of the ideas.