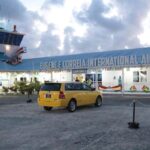 Kaieteur News – The National Task Force COVID-19 (NCTF) has suspended air travel from Brazil for the next 30 days in light of the new COVID-19 variant found there. This ban comes as part of a growing government effort to curb the spread of this new variant, given Brazil’s proximity and the nation’s lack of testing capacity.
The Director General of the Guyana Civil Aviation Authority, Egbert Fields, told Kaieteur News yesterday that the order was placed by the NCTF on Thursday, which took effect immediately following their pronouncement.
The new variant detected in Brazil earlier this month has been identified as the “P.1” strain, which is said to be highly contagious, making it spread faster and easier. It is from three new mutations discovered between the last quarter of 2020 to January 2021. The other two strains are the B-117 strain found in the United Kingdom and the 501Y.V2 strain, identified in South Africa.
Notably, as air travel from the country is now restricted and the Takatu land border crossing in Region Nine (Upper Takatu- Upper Essequibo) connecting Guyana with Brazil is also closed, Brazilian people cannot travel to Guyana through official entry points. The land border has been closed since March last year when Guyana closed all borders after recording its first case.
Recently, the Minister for Health, Dr. Frank Anthony, has announced that the land border will remain closed as the government is very concerned about the newly detected stress, and a possible spread to Guyana that could overwhelm the healthcare system. He lamented that it was a health hazard for a country like Guyana, saying, “And if this is more transmissible, then more people are going to become infected and if more people are going to become infected, then let’s assume we have a percentage of them – a higher percentage of them coming into hospital needing ICU care. ”
Kaieteur News understands that while land and air travel is restricted, the weekly exchange of goods between the two countries will continue. The exercise, which is monitored by the Guyana and Brazilian health authorities, usually takes place every Thursday at the Takatu land border.
More joint service patrols will monitor the land border to ensure there is no illegal crossing at other unofficial access points.
Meanwhile, Guyana is still awaiting COVID-19 test results from the samples sent to the Caribbean Public Health Agency to test for the new variants of the virus. Tests for the new variants require genetic sequencing according to Minister Anthony, but the public and private health system lack such resources.